A geomagnetic storm is about to impact Earth's atmosphere, and will provide many with the unique opportunity to view a light show like no other in the form of an Aurora. The National Oceanic and Atmospheric Administration (NOAA) has called for a geomagnetic storm watch that begins March 14th (UTC day) and a G1 (Minor) watch for March 15th.

A solar storm is often due to an eruption, which could be as powerful as billions of nuclear bombs, on the sun called a coronal mass ejection, or CME. The ejection is an enormous cloud of electrically charged particles that are propelled into space at speeds around three million miles per hour and disturb the interplanetary magnetic field in our solar system. In the instances where these particles and the magnetic disturbances encounter Earth's magnetic field, they merge in a series of complex physical processes, and set off perturbations in the Earth's magnetic field. It is those perturbations that are called geomagnetic storms.

It is the solar flare produced geomagnetic storm that will provide the possible spectacular and unique light show in the night sky, also known as the Northern Lights, or Aurora Borealis. Typically this type of light show is best viewed at the magnetic poles. While the northern lights have been as far south as New Orleans, they are usually viewed in the north west of Canada and Alaska. 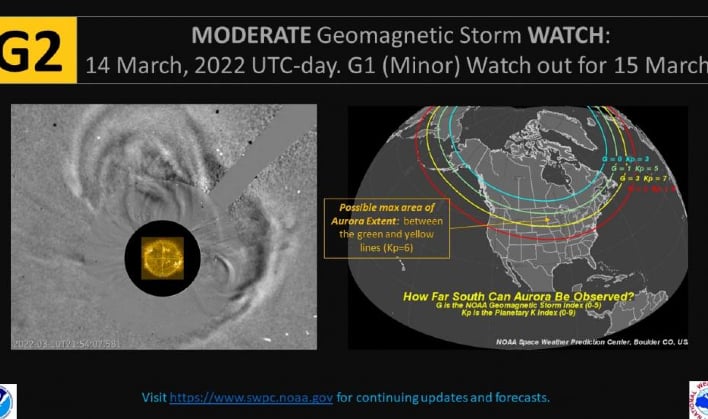 According to NOAA, the upcoming light show may be viewable as far south as Virginia in North America. You can view the image above to see if you might be in the area where the dancing lights in the night sky will be viewable, noting that the max area of Aurora Extent lies between the green and yellow lines.

It is also worth noting that during a geomagnetic storm, radio communications may fail, there may be a reduction in GPS systems accuracy, damage to satellites could occur and there is a possibility it could harm electrical grids.

"We don't know exactly what causes the depletion," stated Attila Komjathy of NASA's Jet Propulsion Laboratory. "One possible explanation is that electrons are recombining with positively charged ions until there are no excess electrons. There could also be a redistribution, electrons being displaced and pushed away from the region, not only horizontally but vertically."

If you are fortunate enough to be in the viewing area, you could be privy to one of nature's most spectacular light shows. If you happen to capture a picture of the event, please feel free to share it here in the comments, or you can join Hot Hardware's Discord and share there as well.