As gamers here at HotHardware, we can't think of many better ways to blow off steam at the end of a hard day than relaxing with our favorite games. The Elder Scrolls V: Skyrim has been one of our top favorite games over the past 11 years and it is without a doubt one of the most popular in the magic and mysticism-based franchise, period. It has perhaps received more rerelease versions and ports than any other game, including the Very Special Edition for Amazon Alexa. The latest release is for the Nintendo Switch (again), but some gamers may feel they are paying with their blood. 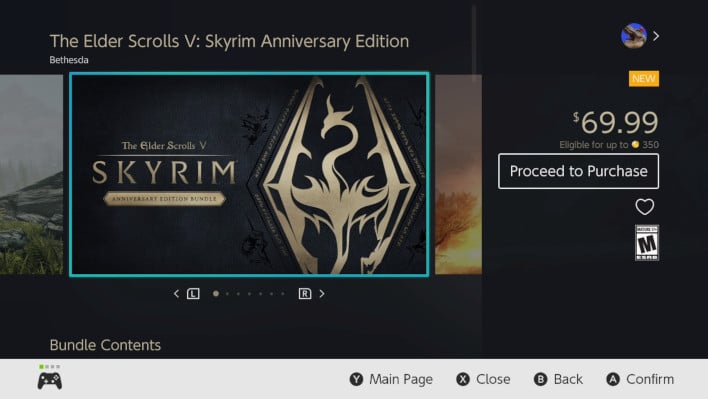 The Anniversary Upgrade—which launched on other consoles and PC last year—includes new quests, dungeons, bosses, weapons, spells, and more. Normally the base game retails at $59.99, and the Anniversary Upgrade at $19.99, so technically it is a bit of a deal, but it's only a $10 discount overall. Yes, the Switch version is based on the upgraded Special Edition (though slightly tamed for the portable), but Skyrim debuted over a decade ago at this point. We do not have an issue with the standalone Anniversary Update pricing per se, but we would like to see the base pricing at least halved so more gamers can embark on the adventure.

Skyrim was originally ported to the Switch in 2017. To Bethesda's credit, it does include all three original DLC packs for the game: Dawnguard, Hearthfire, and Dragonborn. Dawnguard and Dragonborn both expand the story with new campaigns and a host of new weapons, combatants, and NPCs. Hearthfire instead allows players to settle down, buy some land, and build a home—even multiple—using resources gathered across the land. These do help the value of the bundle, at the very least.

The interesting thing to think about here is actually just how many releases the title has had since it was originally released. Some updates were provided to people for free on the PC, while other upgrades like the aforementioned Special Edition had a cost. Our favorite editions, though, being PC people, are definitely the ones available on Steam. There are some incredible mods available with both the PC and the Xbox versions of the title. Unfortunately Playstation and Nintendo Switch users don't really get as much mod capability—so no terrifying replacement of the dragons with Thomas the Tank Engine. 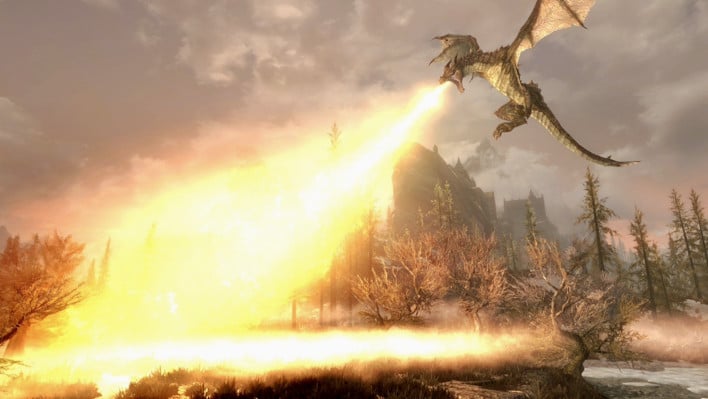 Still, it's nice to see the Anniversary Edition available, and new options for the Nintendo device. It's also becoming more apparent as hardware evolves that we will start to see more hefty games on the Nintendo Switch, and other devices, like the Steam Deck. It's definitely a good time to be in on portable.