The Elder Scrolls V: Skyrim turns a decade old next month, and in celebration of 10 years of relevance, Bethesda is releasing a 10th Anniversary Edition to PC and consoles. Bethesda has talked about this before, but now it's offering up a sneak peek at what's in store for all you Dragborn who might be looking for new and fun things to do.
A plethora of quests, mods, and The Elder Scrolls Online have combined to make Tamriel a popular destination for such a long time. Adding to the pile, The Elder Scrolls V: Skyrim Anniversary Edition brings with it some interesting modes, such as Fishing and Survival, that are shown off in a new overview video. Check it out below...

Survival Mode came to Skyrim in 2017 and will be included in the Anniversary Edition as well, Bethesda has confirmed. It's a different way to experience the game—you have to stay warm and seek shelter so you don't freeze to death in the sometimes unforgiving landscape, and also make sure you don't succumb to starvation.
Another creation headed to the Anniversary Edition is Saints and Seducers.
"Originally released in 2019, this creation introduces an additional storyline across two quests (complete with side quests) for players to delve into. With additional armor sets, weapons, enemies and much more to discover, Saints and Seducers features some of the largest amounts of content we’ve ever packed into a single creation!," Bethesda explains. 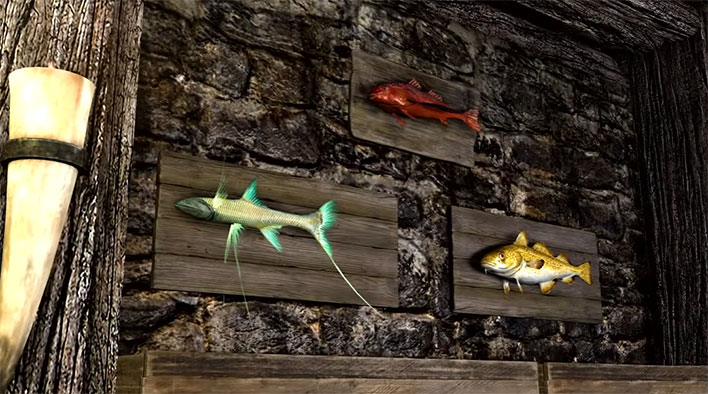 Those who fancy themselves as master anglers might be most interested in an all-new Fishing mode. You'll be able to cast your line and try to hook over 20 unique species of fish across various bodies of water. You can then cook and eating your catches, or display them on your wall as trophies. You can even keep them as pets, if you so choose.
In todal, Bethesda is offering up four creations from the Creation Club for free to existing Skyrim Special Edition owners, if you don't want to purchase the Anniversary Edition. However, those who do buy the Annivesary Edition will et access to even more content, including the complete Special Edition, all previously releaed Creation Club content, new quests, and more.
Bethesday says Skyrim Anniversary Edition will be available November 11, 2021.