Memory maker SK Hynix is over the moon at being the first to market with a consumer solid state drive (SSD) that uses 128-layer NAND flash memory chips, and while that is notable, the real treat here is the balance of speed and price. The company's new Gold P31 is both fast and relatively affordable, particularly in the realm of NVMe drives.
SK Hynix being first to offer a 128-layer NAND powered SSD is only mildly surprising. After all, the company makes its own chips and storage components.
"As a leading manufacturer of memory chips, SK Hynix designs, develops, and supplies its own DRAM and NAND flash devices as well as internal SSD controllers. Prior to the addition of the Gold P31 PCIe SSD, SK Hynix launched the Gold S31 SATA consumer SSDs, offering the industry’s best-in-class speeds and reliability," SK Hynix says.
So, what are we looking at here? The new Gold P31 is a M.2 drive with an NVMe interface, meaning it is one of those drives that is shaped like a stick of bubble gum, and taps into the PCI Express bus. In this case, it is a PCIe 3.0 model, and not a PCIe 4.0 drive. However, the rated specifications are still plenty fast for most people. 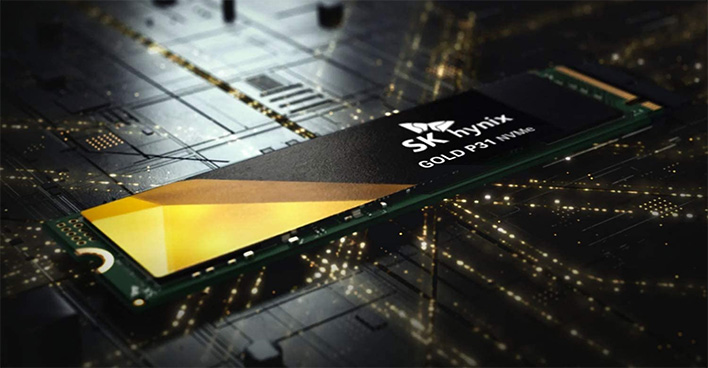 SK Hynix is offering the Gold P31 in two capacities: 1TB and 500GB. As far as we can tell, both drives are rated to deliver up to 3,500MB/s of sequential read performance and up to 3,200MB/s of sequential write performance. Those speeds are roughly on par with Samsung's 970 Evo drives, which are rated to deliver up to 3,500MB/s and 3,300MB/s of sequential read and write performance, respectively.
Where SK Hynix has the distinct advantage is with pricing...
That works out to around $0.13 per gigabyte for the 1TB model, and around $0.15 per gigabyte for the 500GB model. In comparison, Amazon sells Samsung's 970 Evo Plus 1TB for $189.99 (around $0.20 per gigabyte) and the 500GB model for $99.99 (also around $0.20 per gigabyte).
The warranty is not too shabby, either. Like Samsung's 970 Evo Plus, SK Hynix is offering a 5-year guarantee on its new Gold P31 SSDs. Both capacities are available now.