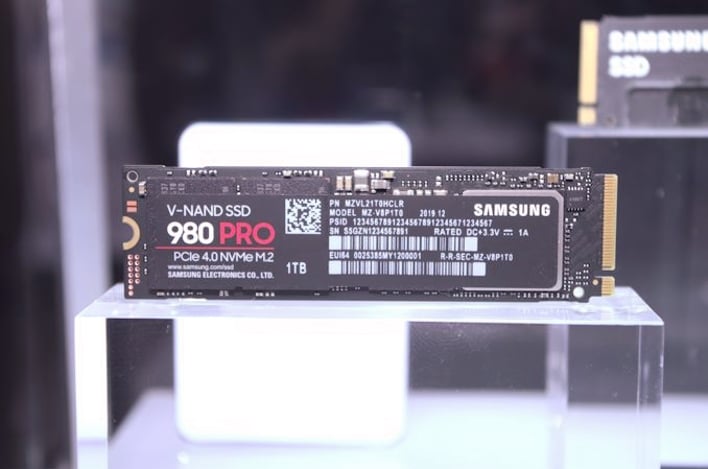 Back at CES 2020, we got our first glimpse at Samsung's upcoming 980 Pro SSD. Up until this point, Samsung's fastest consumer SSDs have used the PCIe 3.0 interface, but the 980 Pro will use the new PCIe 4.0 interface supported by AMD's X570 and B550 chipsets.

We weren't given an exact launch date for the 980 Pro when it was initially announced, but reliable hardware leaker Ice Universe is claiming that the SSD family will launch within the next two months. So, it seems as though the worse-case scenario is that we'd see the 980 Pro show up by the end of August.

Samsung 980 Pro SSD will be released within two months, you will see the super performance of real PCIe 4.0 SSD.

However, the 980 Pro will be worth the wait due to the specs that Samsung is claiming for the drive. Samsung is promising maximum sequential reads of 6.5GB/sec, while sequential writes will come in at 5GB/sec. To put that in perspective, the PCIe 3.0-based 970 Pro lays down numbers of 3.5GB/sec and 2.7GB/sec. That's a huge jump in performance in a single generation, and is sure to be welcomed by gamers and hardware enthusiasts.

The new 980 Pro isn't the only impressive SSD that's in the pipeline from Samsung. Earlier this week, we brought you news of Samsung's new 870 QVO family of SSDs that have yet to be announced, but still managed to show up on Amazon. The star of the show is the MZ-77Q8T0B/AM, which has a massive 8TB of storage space. Most people won't even care that the SSD is SATA III-based, because that large capacity and [likely] performance of around 550MB/sec and 520MB/sec (sequential read/write) should be plenty fast for mass storage. When the 8TB 870 QVO launches, it will be priced at $899.