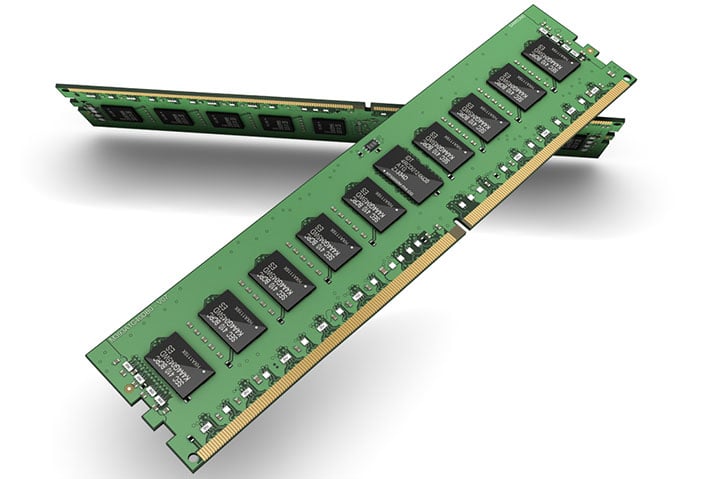 For the first time ever, Samsung is applying extreme ultraviolet (EUV) technology to its production of dynamic random-access memory (DRAM) modules, and has already shipped one million of them in DDR4 form. Looking further down the road, Samsung anticipates this leading to more cutting-edge EUV process nodes, including what will be used on its upcoming DDR5 memory chips next year.
No other memory maker has yet adopted EUV in DRAM production, so in that regard, Samsung earns itself a bit of bragging rights. More importantly for customers, this could potentially lead to lower pricing due to better yields, and faster performance. To what extent, however, remains to be seen, but we should find out soon enough.
EUV lithography is already used in cutting edge processor manufacturing. For example, TSMC announced in October of last year that it had begun mass producing chips based on its 7-nanometer plus (7nm+) EUV lithography, which could potentially underpin AMD's upcoming Zen 3 processors. Likewise, Intel has plans of cranking out 7nm EUV silicon next year.
As its name implies, EUV leverages ultraviolet light with short wavelengths to carve patterns into silicon. It is a more precise lithography compared to multi-patterning, which can reduce repetitive steps and improve pattern accuracy. This is what ultimately leads to better performance and superior yields with less defective chips. In turn, it lowers costs for chip makers, as well as shortens develop time.
Samsung anticipates shifting to EUV manufacturing exclusively for for its future DRAM products, and that includes DDR5, which is due out in 2021.
"In line with the expansion of the DDR5/LPDDR5 market next year, the company will further strengthen its collaboration with leading IT customers and semiconductor vendors on optimizing standard specifications, as it accelerates the transition to DDR5/LPDDR5 throughout the memory market," Samsung said.
Samsung also noted it is opening a second fabrication line in Pyeontaek, South Korea, as it anticipates "growing demand" for its next-generation DRAM products.