Forget Botox, Human Muscle Cells Are Being Launched Into Space For Anti-Aging Research

Scientists are sending human muscle cells into outer space in order to try and find ways to combat muscle loss as you get older. As people are surviving longer, the effects muscle loss have on our aging population becomes more important.

Astronauts on the International Space Station (ISS) are required to workout 90 minutes to two hours each day in order to maintain their health and combat the accelerated rate at which they lose muscle mass while in space. So, even after enjoying their Thanksgiving meal this past November, the US team of NASA astronauts participated in their own version of the Turkey Trot. Astronaut Raja Chari had prepared for the day saying, "I've got some special surprise colored headbands for the crew to wear." Researchers want to know more about why astronauts experience such a loss of muscle mass, so they are launching muscle cells into space to attempt to learn more.

Researchers at the University of Liverpool are set to send muscle cells to the International Space Station (ISS) in order to carry out a series of experiments in microgravity. The aim of the research is to identify why astronauts lose muscle mass while in space at an accelerated rate in comparison with older people here on Earth.

Professor Anne McArdle from the University's Institute of Life Course and Medical Sciences, expounds on this saying, "Identification of the underlying mechanisms responsible for this loss of muscle mass and strength with age has been the subject of our research for a number of years. Astronauts in microgravity lose their muscle mass and strength at an accelerated rate compared with older people on earth, providing a unique model to rapidly determine the mechanisms underlying muscle loss not only in astronauts, but with relevance to older people on earth."

Estimates show that by 2034 in the UK alone, about 23% of its population, or 15 million people, will be over the age of 65. This has some worried about how physical frailty will be a huge factor affecting the ability and mobility of individuals as they get older and their ability to maintain independence. The loss of ability and mobility can be attributed in large part to age-related loss of skeletal muscle mass and function. 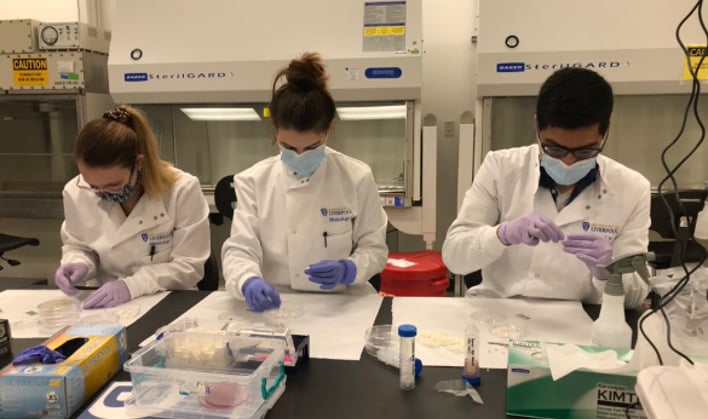 The research team is sending twenty-four self-contained experimental units containing "mini muscles" grown for human muscle cells to ISS. Each of these units will be given a different "mission patch" designed by entrants of a competition for children and young adults to design the official MicroAge Mission patch.

While in space, some of the muscle cells will be electrically stimulated in order to "exercise", while others will be exposed to increased amounts of protective heat shock proteins. These heat shock proteins have been shown by the team at Liverpool to provide protection against age-related muscle wasting. Once the experiments have been completed, the muscle cells will be frozen and returned back to Earth for researchers to continue studying them.

The experiment has not been without its own unique challenges, however. The team has had to overcome a three-year build up to the mission, which is primarily in relation to the space constraints on the ISS and the limited astronaut time.

"In our labs, the electronic equipment necessary to undertake these studies fills a large desk. The biggest challenge was to miniaturize this to the size of a pack of cards. Maintaining the viability of the muscles for prolonged periods of time in a small, sealed unit was also a major challenge," explains Dr. Samantha Jones, the senior postdoctoral fellow working on the project. She continued saying, "The muscles need to survive the potential changes in temperature, vibration and G-force during launch and so detailed testing of the muscles has been critical."

All of the team's hard work is about to be sent to ISS aboard the SpaceX 24, which is scheduled for launch on December 21st. The team from Liverpool has traveled to the Kennedy Space Center in Florida to grow the muscle cells and to support the final preparations for launch.

Professor Malcom Jackson, the project lead, stated, "It is amazing that the launch day is finally almost here." He added, "We will not be able to evaluate the results of the scientific study until we receive the muscle samples back from the ISS, but seeing this University of Liverpool experiment launch to the ISS on top of a Falcon 9 rocket on 21 December is already going to be a fantastic, exciting tribute to the MicroAge team."

NASA will be providing live coverage of the launch on its website and social media channels. The countdown commentary is scheduled to begin at 9:45 a.m. GMT on Tuesday, December 21st.

With humans living longer it will be vital to find new ways to help make the aging process less destructive on the human body. To what degree that will be possible is yet to be determined. But with researchers like those at the University of Liverpool searching diligently for those answers, the hope is a bit brighter.