Sounds sent back from NASA's Juno probe as it passes Jupiter's moon Ganymede has the eerie feeling of something right out of a science fiction flick. New pictures of Jupiter also has NASA comparing its atmosphere and oceans with Earth's.

NASA has its hands full lately with all its missions and information that is continuously coming in. Mars Perseverance rover recently found evidence of possible ancient volcanic activity on the red planet and the Parker Solar Probe was the first human-made object to ever touch the Sun. Throw into that mix the upcoming Artemis missions and the upcoming launch of the James Webb Space Telescope (JWST) and NASA has many reasons to be excited. But it is images of Jupiter and sounds from its moon Ganymede that have NASA and others talking right now.

During a briefing yesterday at the American Geophysical Union Fall Meeting in New Orleans, NASA unveiled a 50-second audio recording of the Juno probe as it passed nearby Ganymede. The recording was debuted by Scott Bolton of the Southwest Research Institute in San Antonio and Juno principal investigator. He stated about the recording, "This soundtrack is just wild enough to make you feel as if you were riding along as Juno sails past Ganymede for the first time in more than two decades." He continued, "If you listen closely, you can hear the abrupt change to higher frequencies around the midpoint of the recording, which represents entry into a different region in Ganymede's magnetosphere."

The recording is from a flyby of Juno as it passed close to Ganymede on June 7, 2021. The actual sound heard was derived from Juno's Waves instrument, which tunes in to electric and magnetic radio waves produced in Jupiter's magnetosphere. As NASA reported, "Their frequency was then shifted into the audio range to make the radio track." The audio was captured as Juno made its 34th trip around Jupiter. The spacecraft was approximately 645 miles (1,038 kilometers) of the moon's surface while traveling at a speed of about 41,600 mph (67,000 kph).

NASA states that analysis and modeling of the Waves data is still ongoing. William Kurth of the University of Iowa and lead co-investigator for the Waves investigation, added, "It is possible the change in frequency shortly after closest approach is due to passing from the nightside to the dayside of Ganymede."

The other interesting news that was introduced at the briefing included some new photos of Jupiter's Great Blue Spot (not to be mistaken with its Great Red Spot). NASA has been compiling data from 32 orbits during Juno's primary mission. The compiled data has been used to create a map that has given new insights into Jupiter's Great Blue Spot, which is a magnetic anomaly located at the planet's equator. 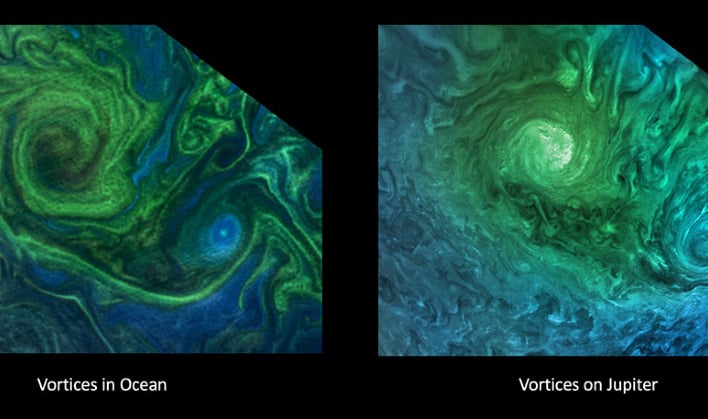 The data reveals that a change in Jupiter's magnetic field has taken place during Juno's five year's in orbit. It also indicates that the Great Blue Spot is actually drifting eastward at a speed of around 2 inches (4 centimeters) per second as in relation to the rest of the giant gas planet's interior. This would mean the spot will lap the planet in about four-and-a-half-years.

Additional information shows that Jupiter's zonal winds are pulling the Great Blue Spot apart. Zonal winds are jet streams that run east to west and west to east, and gives Jupiter it's peculiar banded appearance. This seems to demonstrate that the zonal winds measured on the surface of the planet actually reach deep into the planet's interior.

Along with new data in relation to the Great Blue Spot, NASA has also been able to take the new magnetic field map and make comparisons with Earth's magnetic field. Data suggests that dynamo action, the mechanism by which a celestial body generates a magnetic field, in Jupiter's interior results in metallic hydrogen, beneath a layer expressing "helium rain."

As more data is collected and analyzed from the gas giant, NASA hopes to draw more comparisons to Earth and unravel the mysteries that are held within Jupiter itself. As mentioned earlier, NASA has plenty to be analyzing, explore, and to be excited about. With so many missions that are sending so much data back, we can only wait to see what new revelations will be revealed about our vast universe.