Bitcoin and other cryptocurrencies took another hit after Celsius, one of the leading crypto lending firms, announced it is pausing all withdrawals and transfers "due to extreme market conditions." After the announcement, Bitcoin slid to below $25,000, dipping more than 12 percent on Monday to below $24,000. That's the lowest it's been in 18 months.
"Acting in the interest of our community is our top priority. In service of that commitment and to adhere to our risk management framework, we have activated a clause in our Terms of Use that will allow for this process to take place. Celsius has valuable assets and we are working diligently to meet our obligations," Celsius stated in a post on Medium.
"We are taking this necessary action for the benefit of our entire community in order to stabilize liquidity and operations while we take steps to preserve and protect assets. Furthermore, customers will continue to accrue rewards during the pause in line with our commitment to our customers," the site added.
This has been a rough year for cryptocurrency investors, or at least for the ones who bought into Bitcoin, Ethereum, Shiba Inu, and other digital currencies when the values were much higher than they are now. The crypto market's been crashing hard and while there have been some rebounds here and there, values continue to plummet for the most part.

Case in point, the cryptocurrency market has a whole has fallen below the $1 trillion mark for the first time since January 2021, and after peaking at $2.9 trillion just seven months ago. The global crypto market is now at $969.69 billion. That's a 13 percent drop over the last day, seemingly sparked in part by Celsius halting transactions.
This is a bad look for the lender, made even worse by an earlier tweet by its founder and CEO, Alex Mashinsky, in response to a user saying they've heard about accounts being locked. 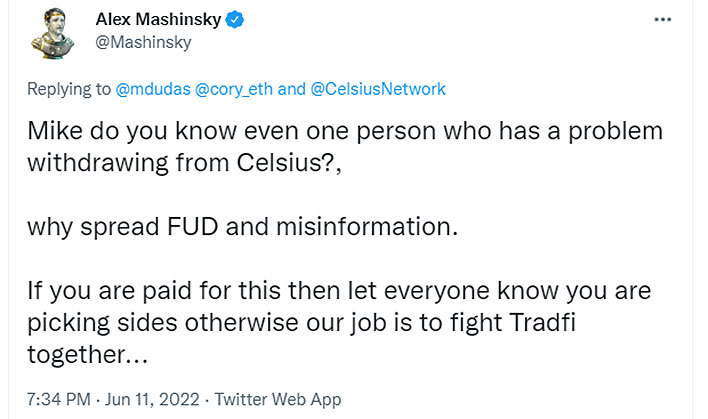 "Mike do you know even one person who has a problem withdrawing from Celsius? Why spread FUD and misinformation. If you are paid for this then let everyone know you are picking sides, otherwise our job is to fight Tradfi together...," Mashsinsky wrote two days before Celsius announced the halt on withdrawals.
Suffice to day, the tweet didn't age well, and in a very short time to boot. Celsius users are livid, as evidenced by the angry comments to the announcement, some of which accuse the lender of being "scammers."

On the bright side, those who have their crypto funds tied up will still accrue rewards. Unfortunately, there's no clarity how long transactions will remain on pause.
"There is a lot of work ahead as we consider various options, this process will take time, and there may be delays," Celsius says.