Next-generation solid state drives (SSDs) are coming and they are going to bring big speed increases to consumers and enterprise clients. As it pertains to the latter, Samsung opted to get a jump on the barrage of Consumer Electronics Show (CES) announcements that are coming and unveil its PM1743 SSD ahead of the event.
The speed increases are the result of drive makers increasingly hopping onto the PCI Express 5.0 bus, which doubles the available bandwidth compared to PCI Express 4.0. Of course, a supported platform is a requisite for tapping into the added throughput next-gen SSDs are capable of providing.
In this case, Samsung says the PM1743 is rated to deliver up to 13,000MB/s and 2,500K IOPS of sequential and random read performance, respectively. For writes, the PM1743 is rated to reach 6,600MB/s and 250K IOPs. Samsung's also claiming improved power efficiency to the tune of 608MB/s per watt, which equates to around a 30 percent boost over the previous generation.
As for reliability, Samsung and Intel have been working together on testing and qualifying the PM1734 SSD and its NVMe interface.
"Together, we have jointly resolved complicated technical issues encountered with PCIe 5.0 during this initial evaluation period. The performance potential of Gen5 is truly impressive. In the near future, we strongly believe that PCIe Gen5 systems with high-speed NVMe SSDs will have the ability to transform applications such as AI/ML and high-performance databases," said Jim Pappas, Director, Technology Initiatives, Intel Corporation. 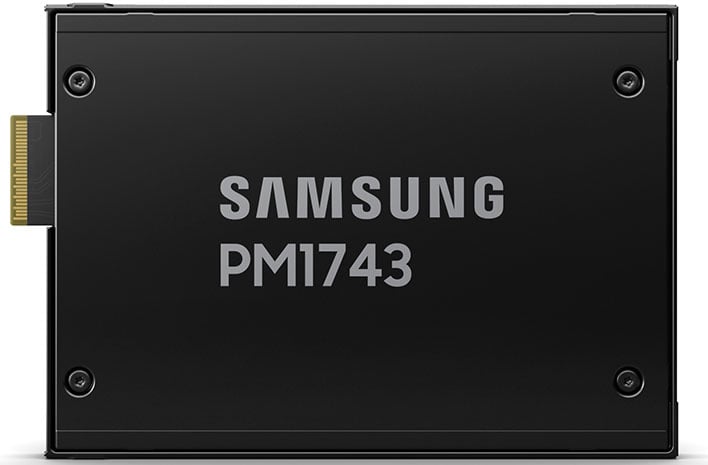 Samsung intends to offer the PM1743 in capacities ranging from 1.92TB to 15.36TB, the latter of which is far more capacious than most consumer SSDs. The drives will be offered in both 2.5-inch and 3-inch EDSFF (E3.S) form factors.
"Customers deploying 7.5mm EDSFF SSDs will be able to double the storage density in their systems, compared to when the 15mm 2.5-inch form factor is used. Coupled with excellent signal integrity and thermal efficiency, the EDSFF is ideal for most PCIe 5.0 enterprise solutions," Samsung says.
One other interesting tidbit can be found in Samsung's announcement—the company says it is already begun developing PCI Express 6.0 storage solutions, though obviously such products are further down the roadmap.
More immediately, Samsung says it has been sampling the PM1743 to chipset and server manufacturers, and will begin mass producing the drive in the first quarter of next year.