PCIe 6.0 Spec On Track For 2021 Delivery With Blazing 64 GT/s Per Lane Bandwidth 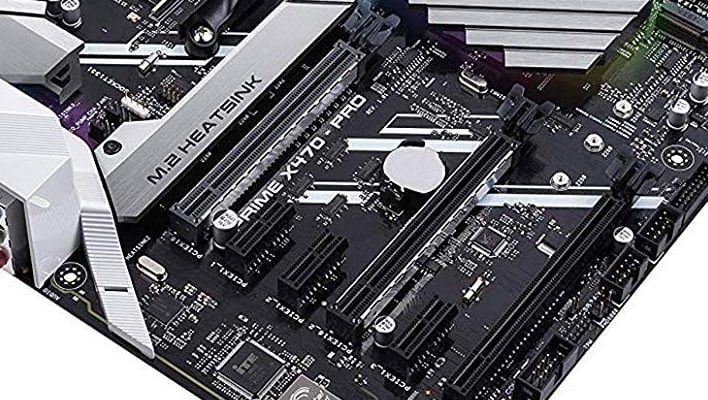 The standards body responsible for the PCI Express bus is cruising right along towards PCI Express 6.0, the next-generation standard that is still on track for a finalized specification in 2021. As part of that journey, PCI-SIG announced the release of version 0.5 of PCIe 6.0. The latest draft specification incorporates "significant member feedback" PCI-SIG received after version 3.0 landed, though one thing is unchanged—a doubling of bandwidth over PCIe 5.0.
Each new generation of the PCIe specification brings a doubling of bandwidth over the previous version. These days, PCI-SIG shoots for a two-year update schedule. However, it takes a bit longer for updated specifications to find their way onto consumer motherboards, and sometimes a lot longer. Case in point, Intel is still banging out PCIe 3.0 chipsets, and that specification landed in 2010.
Meanwhile, AMD has made the transition to PCIe 4.0 (released in 2017) with its X570 chipset for its third-generation Ryzen processors. It is the only consumer option right now. So, what's the big deal? 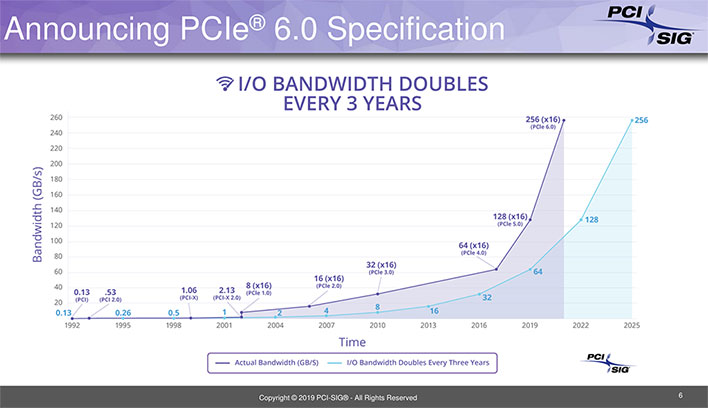 The PCIe 6.0 spec supports 64GT/s speeds (per lane), which is double the 32GT/s speed of PCie 5.0. This effectively translates to around 256GB/s of bandwidth at full throttle (x16). That is also double the previous generation.
Here's a breakdown...
"By doubling the bandwidth and diligently maintaining our strict timeline, we believe that we will be able to deliver the industry’s needs for throughput aligned with their timelines. Emerging data-hungry markets like artificial intelligence, machine learning, high-performance computing and more, demand additional speed and capabilities that the newest PCI-SIG architecture will easily fulfill," PCI-SIG says.
There are two caveats to all this. One is how long it takes for these specifications to actually be implemented onto consumer products. Even though the PCIe 6.0 specification is bound for a 2021 release, it will probably be a couple years after that before it ends up on motherboards. Secondly, there is limited utility for home users.
As things stand, the PCIe bus not really a bottleneck for graphics, so if you are a gamer, don't expect double the performance from your GPU based on the PCIe bus alone.
That's not to say there is no point in all of this. Hardware makers will eventually catch up to the faster specifications, and on the storage side of things, it is already happening, The fastest SSDs are the newfangled PCIe 4.0 models that push read and write speeds to 5,000MB/s and beyond. That doesn't matter so much for gaming and general purpose computing chores, but for storage heavy tasks, the added speed is certainly a boon.
PCI-SIG says it will share more information about PCIe 6.0 during the upcoming PCI-SIG Developers Conference 2020 on June 3-4 in Santa Clara.