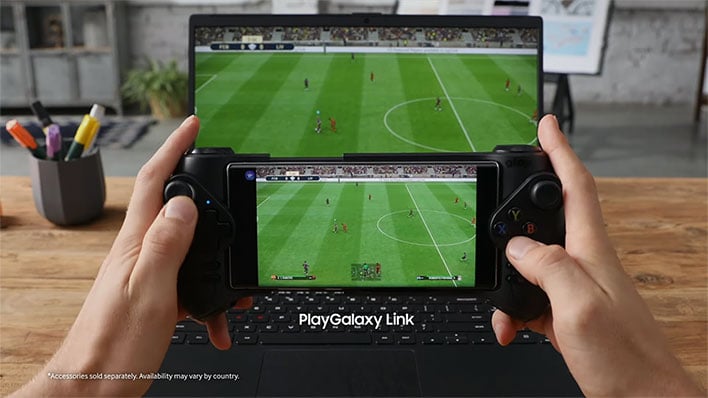 We are all waiting for Samsung to eventually unveil its next flagship smartphone, the Galaxy S11, but that will not be for another few months. In the meantime, Samsung is introducing something a little different. It's a PC game streaming service for the Galaxy Note 10 and Galaxy S10 (initially) called GalaxyLink Play, which will also be made available to other Galaxy phones at a later date.
From Samsung's vantage point, cloud gaming "has dominated the industry in 2019." I don't agree with that assessment, even when factoring in Google's recently launched Stadia platform, which has had its share of hiccups in the early going. Regardless, Samsung views GalaxyLink Play as a new service that goes beyond cloud gaming.

"Whether you’re in transit to work, outside in the park, or chilling on the couch, you can use the PlayGalaxy Link app on the Galaxy Note10 to connect to your PC using Wi-Fi or mobile data (4G/5G) and pick up right where you left off in the game," Samsung says.
While I don't share Samsung's opinion on cloud gaming in general (it's a concept that has yet to really take hold, in part because of latency), mobile gaming is certainly hot—so much so, that we have seen a growing number of gaming handsets emerge, like the ASUS ROG Phone II. PC gaming has also seen somewhat of a resurgence in recent years.
Samsung's move to merge the two with PlayGalaxy Link is interesting, especially if it works as advertised.
"When accuracy matters most, lag and latency will be less of a problem as PlayGalaxy Link is designed with a P2P connection which provides you with simplicity for better performance without a relay server. The service also uses Adaptive FPS to ensure better connectivity even in poor network environments," Samsung explains.
Since this is a streaming play, the PC does all of the heavy lifting. As such, local storage and GPU performance on the handset does not matter. Samsung also claims supported Galaxy devices do not get hot or drop frames while playing.
As of right now, PlayGalaxy Link is open to Galaxy Note 10 and Galaxy S10 owners in the US and several other regions. Samsung plans to expand the service to more phones next month, including the Galaxy Fold, Galaxy S9, Galaxy Note 9, and Galaxy A90.