One of Samsung's brightness gaming monitors just fell to an all-time low on Amazon. That would be the Odyssey Neo G8 (model LS32BG852NNXGO), a 32-inch display built around a curved Vertical Alignment (VA) panel with mini LED backlighting capable of hitting 2,000 nits. That's almost as bright as the sun (slight exaggeration before anyone nitpicks—the sun gets up to 1.6 billion nits during the middle of the day).
The magic of mini LED backlighting is that all those tiny lights combine to kick up the brightness way above what regular LED monitors can kick out. It also allows for finer-grain control of lighting up and darkening specific parts of a scene with less bloom (halo effect), when combined with full-array local dimming (FALD) technology. In this case, you're looking at 1,196 mini LED zones.
Samsung's 32-inch Odyssey Neo G8 debuted at CES earlier this year and then finally became available in June for $1,499.99. Now as Black Friday discounts come into view, it can be had for $999.99 at Amazon (33% off), saving you $500 over MSRP. That's the same price as LG's just-announced 27-inch UltraGear OLED monitor (which isn't available to buy just yet).
While expensive, there's a lot to like about the Odyssey Neo G8. In addition to being an extremely bright monitor with DisplayHDR 2000 certification, it's also a 4K resolution display with a fast 240Hz refresh rate and both FreeSync (FreeSync Premium Pro) and NVIDIA G-Sync (certified G-Sync Compatible) support to kick screen tearing to the curb. 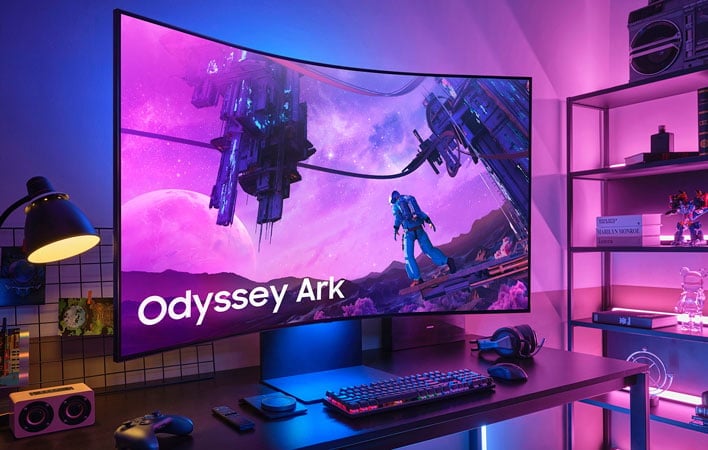 This is one of several Samsung gaming monitors that are on sale for the holiday season. So is the massive 55-inch Odyssey Ark and a bunch of others...
While we've highlighted several Samsung displays that are on sale, other manufacturers are getting in on the savings, too. You can browse Amazon's collection of gaming monitors for the latest deals.