Samsung showed off a handful of monitors at the Consumer Electronics Show (CES) earlier this year, one of them being the M8, the newest addition to its Smart Monitor series. It's an intriguing 32-inch display with styling that is someone reminiscent of an Apple product, and it's now up for preorder starting at $699.99 direct from Samsung.
Comparisons have been made to the iMac, in terms of visual style and a palette of color options, though the M8 isn't an all-one-PC. The M8 has more in common with Apple's recently announced 5K Studio Display. Both are monitors at their core, and both extend beyond the bounds of a typical display with an array of features.
Let's start with the core specs. The M8 is a 32-inch flat panel with a 4K (3840x2160) resolution, 60Hz refresh rate, and 4ms response time (gray to gray). It offers up 400 nits of brightness and supports HDR content (HDR10+). It also features a 3,000:1 contrast ratio, 99 percent coverage of the sRGB color space, a micro HDMI port, two USB-C ports (one up and one down) with 65W charging, dual 5W speakers, and both Wi-Fi 5 (802.11ac) and Bluetooth 4.2 wireless connectivity. It comes with an remote control, too. 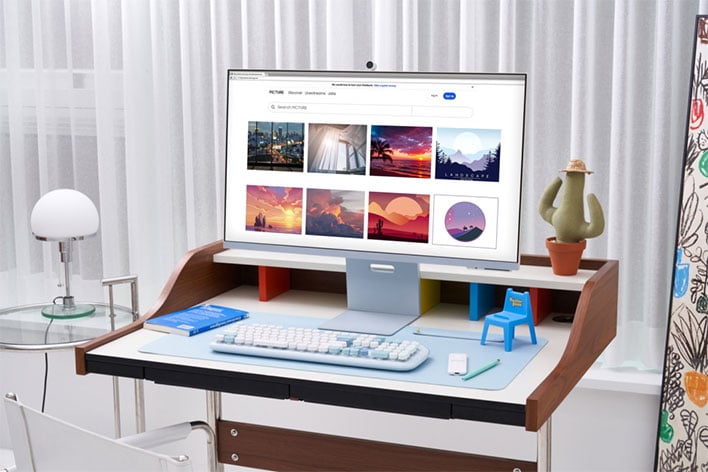 Buyers can choose between four color options, including white, green, pink, and blue. It's the white model that costs $699.99, whereas the other color choices all run $729.99.
In addition to a remote control, the M8 comes with a magnetic and removable SlimFit Cam, essentially a webcam that attaches to the top without any wires. Samsung says the SlimFit Cam features face tracking and auto zoom functions to quick identify a person's face and keep focused at all times. This is supplemented with a Far Field Voice microphone and digital assistant support (Bixby and Amazon Alexa).

The M8 also features an upgraded Smart Hub that allows users to connect the display to various IT devices without using a PC. It's capable of pulling in a variety of over-the-air services without being hooked up to a PC, including Amazon Prime Video, Apple TV, Disney+, and Netflix. Additionally, users can connect a wealth of IoT devices to the monitor's baked-in SmartThings app.

"The Workspace User Interface offers all services needed to work on one screen, helping users wirelessly connect to a Windows or Mac PC and efficiently use an extensive range of useful features, including Samsung DeX, Apple AirPlay 2 and Microsoft 365 cloud service, as well as mirroring content from smartphone to the M8," Samsung says.
If a monitor that doubles as a smart hub for your IoT devices is your jam, you can head over to Samsung and place a preorder (more of a reservation, really).