Samsung is making a spirited run at the gaming TV market, which if we're being real, many people associate with LG and its fancy OLED models. That's because LG was one of the first to embrace the HDMI 2.1 standard (and not fake HDMI 2.1) with features that current generation game consoles can tap into. But others have followed suit. Samsung is among them, and going a step further, the South Korean display maker has started pushing out its new Gaming Hub interface to all 2022 model Samsung smart TVs.
It's a bummer that earlier models are not getting the update, at least for the time being. Or maybe forever—Samsung hasn't announced plans to inject its Gaming Hub into 2021 and earlier TVs. But for those who dished out for a 2022 Neo QLED 8K TV, Neo QLED 4K TV, QLED TV, or a Smart Monitor series display, the Gaming Hub is here to turn your TV or monitor into a streaming console.
"The Samsung Gaming Hub combines Samsung’s leadership in streaming technology with our experience in creating the industry’s most cutting-edge hardware, removing the barriers to entry so people can just play," said Won-Jin Lee, President and Head of the Service Business Team at Samsung Electronics. "With expanding partnerships across leading game streaming services and expert curated recommendations, players will be able to easily browse and discover games from the widest selection available, regardless of platform." 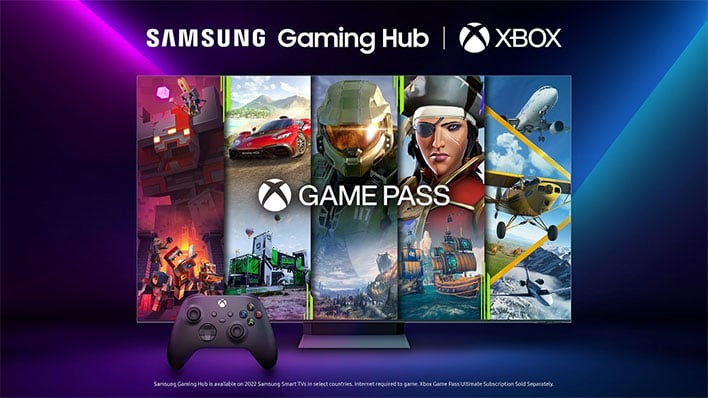 Powered by the Tizen platform, Samsung's Gaming Hub brings a series of streaming apps and services to the forefront of its 2022 TVs, including Microsoft Xbox Cloud Gaming app, NVIDIA GeForce NOW, Google Stadia, and Utomik. Amazon Luna will be added to the fold sometime soon.
"Players can use their favorite accessories, such as Bluetooth headsets and controllers with the Samsung Gaming Hub without the need to purchase new hardware—making it easier to access games than ever before. Additionally, users will be able to see expertly curated recommendations based on the latest and most popular games," Samsung explains.
The Gaming Hub also comes with the promise of easy connections to Twitch, YouTube, and Spotify. In short, the Gaming Hub is exactly like it sounds—a hub for gaming, somewhat similar in concept to the dashboards you see when firing up an Xbox Series X|S or PlayStation 5 console.
It's not simply a streaming interface, either (though its mostly that). While the main allure is being able to subscribe to a game streaming service and then access it on your TV just like you would Netflix or Hulu, it also plays nice with the latest console hardware and peripherals. So there are use some additional use cases here.
If you own a 2022 model Samsung TV, the Gaming Hub update will be installed automatically.