If your TV is so danged smart, why can't it play triple-A games without additional hardware, like a PC or a dedicated console attached? Well, it soon will be able to, depending on the model you own. Microsoft announced it is extending support for its Xbox Cloud Gaming service to smart TVs starting with Samsung's 2022 models.
This effectively means that Xbox Cloud Gaming subscribers will be able to play graphically demanding (compared to mobile) games like Forza Horizon 5, Halo Infinite, Microsoft Flight Simulator, Psychonauts 2, and lots of other games across a range of devices without a heavy GPU investment, including PCs, consoles, smartphones, tablets, and now smart TVs.
For anyone who is not familiar, Xbox Cloud Gaming is a subscription service with a streaming (and growing) catalog of over 100 games, including Xbox Game Studios titles that open up on the same day they release. The appeal is that Microsoft's servers handle the heavy lifting, negating the need to invest in potentially expensive GPU hardware.
Microsoft stated in June that it is working with TV makers to bring its Xbox Cloud Gaming app to a range of smart TVs. We suspect a wider launch is imminent, though to get the living room party started, Microsoft will make its Xbox Cloud Gaming app available on Samsung's smart TVs. Microsoft also recently hinted that it's working on a low-cost Xbox Cloud Gaming streaming dongle of sort. 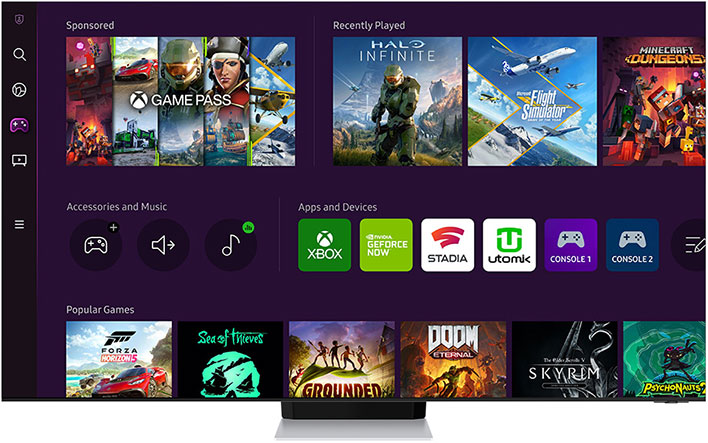 Only models released in 2022 are supported, at least for now. It's not clear if there are plans to expand the app's reach to 2021 or even earlier models, but if so, Microsoft and Samsung are keeping them tight lipped for the moment. For now, you're looking at Samsung's 2022 Neo QLED 8K, Neo QLED 4K, and QLED models, as well as its 2022 Smart Monitor series.
The app is being injected in Samsung's Tizen-powered Gaming Hub, joining the ranks of GeForce NOW, Stadia, and Utomik. According to Samsung, it supports "all of the most popular game controllers" and "most popular voice headsets."
Microsoft says its Xbox Cloud Gaming app will be available on Samsung TVs starting on June 30, 2022 in 27 countries.