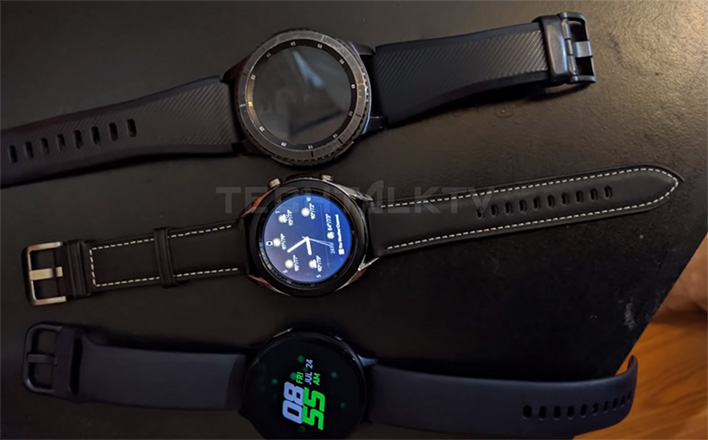 There may not be many surprises when Samsung gets around to formally introducing its next-generation smartwatch. That is because and extensive hands-on video has purportedly leaked many of the pertinent details, including what sizes the Galaxy Watch 3 will be available in, as well as what it looks like from multiple angles.
To start with, according to TechTalkTV on YouTube, it will indeed be called the Galaxy Watch 3. Samsung is apparently skipping the Galaxy Watch 2 branding, presumably to emphasize that is a higher end wearable than its existing Galaxy Watch Active 2. Going with the Galaxy Watch 3 branding would also avoid any potential confusion between the two smartwatches.
Shown in the video is the 41mm version, with a 1.2-inch display. There will also be a larger 44mm version with a 1.4-inch screen. Both will sport 1GB of RAM and 8GB of onboard storage.

The Galaxy Watch 3 has physical rotating bezels, just like its predecessor, but they are thinner on this latest model. It also has two buttons, but with a change in shape. Overall, the Galaxy Watch 3 looks more like a regular watch than a smartwatch, except for the digital bits on the screen, of course.
According to the leaker, the Galaxy Watch 3 earned an IP68 water resistance rating and a 5ATM rating. Those certifications translate into being able to submerge the Galaxy Watch 3 in water depths of up to 50 meters, for up to 10 minutes. So, swimming laps and cannonballs into the pool are fair game, if the information is correct.