We think it's fair to say that the smartphone camera war is getting out of hand these days, with many flagship smartphones having as many as 4 cameras on the rear in addition to a selfie camera on the front. The number of cameras onboard is not at all indicative of actual picture quality, but smartphone OEMs are banking on making the case that more is better for easily-impressed consumers.

To that end, Samsung could be looking to drop the mic -- so to speak -- with next year's Galaxy S30. A newly revealed patent that shows Samsung could be working on a smartphone that could fit up to six cameras on its back panel. For reference, the current Galaxy S20 series has "just" four cameras on the back.

The patent, which was filed on June 11th, was uncovered by the folks at Let’s Go Digital, which shows Samsung going with a horizontal pod that houses the plethora of cameras. What's perhaps even more interesting is that Samsung is employing moving sensors that can actually adjust the focal length, and even capture panoramic images with a so-called "pano-bokeh effect" with a blurred background. 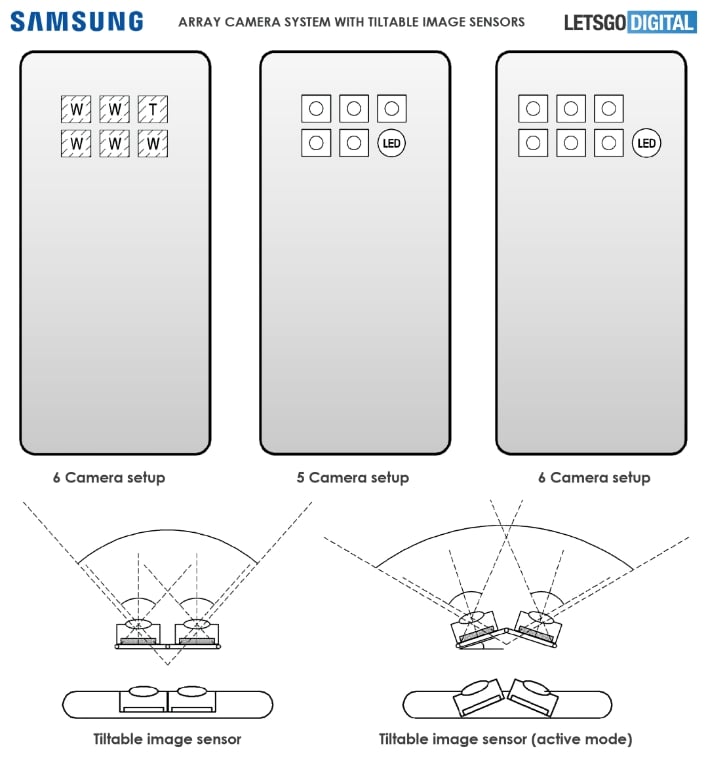 All of the cameras can move independently, either horizontally or vertically, to achieve the desired effect. One particular setup has five wide-angle cameras (which can be identical) along with a single telephoto camera. This would be an incredibly complex arrangement for a smartphone -- even one with "flagship" status like the Galaxy S family. However, it wouldn't be the first time that Samsung has employed a mechanical system with its cameras -- its Galaxy S9 family pioneered a primary camera with a variable aperture.

We should clearly point out as is typically the case with these uncovered patents that there is no guarantee that something like this will actually go into production. Many of these patents are fanciful creations dreamed up by engineers that end up getting put on the back burner until technology catches up and costs come down. And sometimes, they simply never market it to market at all.

With that being said, the Galaxy S30 is likely to be powered by the unannounced Qualcomm Snapdragon 875 SoC, which will hopefully incorporate its own integrated Snapdragon X60 5G modem instead of the two-chip solution found with the current Snapdragon 865.