The biggest and baddest smartphone SoC on the market in Android land is no doubt the Qualcomm Snapdragon 865. Based on 7nm tech, the 8-core SoC comes mandatorily paired with the discrete Snapdragon X55 5G modem and powers current flagships like the Samsung Galaxy S20 family and the OnePlus 8 Series.

With recent rumors that the previously expected Snapdragon 865+ won’t be released during the second half of 2020 with boosted CPU/GPU clocks, all attention is focusing on the next-generation Snapdragon 875 (SM8350). While Qualcomm is likely to give us official details on the chip during the closing months of 2020, some alleged specs have made their way to the internet.

For starters, it’s expected that Snapdragon 875 will be built using the 5nm process node. Qualcomm will be among the earliest to switch from 7nm to 5nm, and Apple will make the same jump with the A14 Bionic arriving with the iPhone 12 family. We don’t have any word on performance metrics, but we should expect some rather decent gains in performance with a nice boost in power efficiency due to the process node shift. 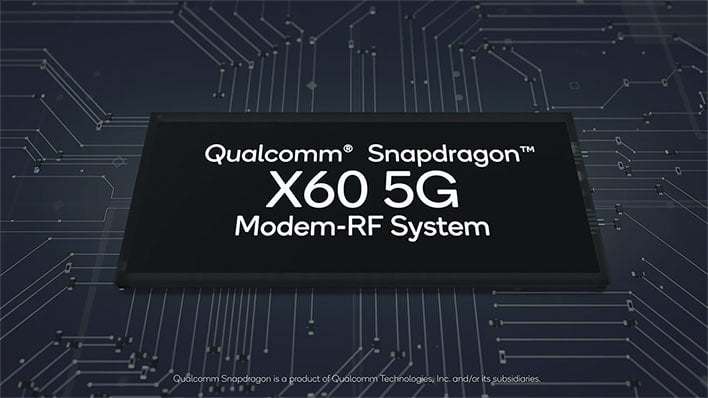 The big question looming over the Snapdragon 875, however, will be its 5G modem. As we previously stated, the current Snapdragon 865 uses a separate 5G modem. This arrangement is not ideal, and means that not only does the chip take up previous real estate on a smartphone’s logic board, but it isn’t as power efficient as having an integrated solution.

Qualcomm’s current mid-range Snapdragon 765 goes the integrated route with its onboard Snapdragon X52 5G modem, and we have no reason to believe that Qualcomm won’t go this same route with its next-generation flagship Snapdragon 875 and the Snapdragon X60. It could also help to lower costs inherent with a two-chip solution, which is exemplified by the higher cost of 2020 Android flagships compared to last year’s models. The Snapdragon X60 is a 5nm design and features peak downlink/uplink speeds of 7.5Gbps and 3 Gbps respectively.

Pending any roadblocks put up by the COVID-19 pandemic, we should see the first Snapdragon 875 smartphones arrive during the first quarter of 2021.