Well look at that, Samsung is rolling out a new Galaxy smartphone! This one is not intended for consumer use, though. Called the Galaxy S20 Tactical Edition (TE), this newest member of the Galaxy family is a rugged, "mission-ready" handset designed for the "unique needs of operators in the federal government and Department of Defense." Clumsy consumers with slippery fingers will have to look elsewhere.
"With a highly customized software and feature set, the Galaxy S20 TE can operate seamlessly with a range of existing peripherals and supports the requirements of tactical and classified applications, especially those designed to help operators navigate complex terrain, expansive distances, and the potential loss of communication with command units," Samsung says.
One of those tactical bits is the DualDAR architecture. It consists of two layers of data encryption based on NSA standards to help keep those top secret files from curious eyeballs (but not quantum encryption).

Apparently the DoD provided feedback to Samsung on the development of the Galaxy S20 TE, though it's not clear to what extent. Our guess is that the IT department offered some guidance to Samsung on what kinds of features and protections would be needed on a handset that would be used in the field for classified missions.
Unlike a regular smartphone, the Galaxy S20 TE is able to connect with tactical radios and mission systems right out of the box. It also features multi-ethernet capabilities and network support for Private SIM, 5G, Wi-Fi 6, and CBRS (Citizens Broadband Radio Service).
There is also a night vision, much to the delight of Dale Doback and Brennan Huff (NSFW-language), and a bunch of other stuff tailored towards military application. 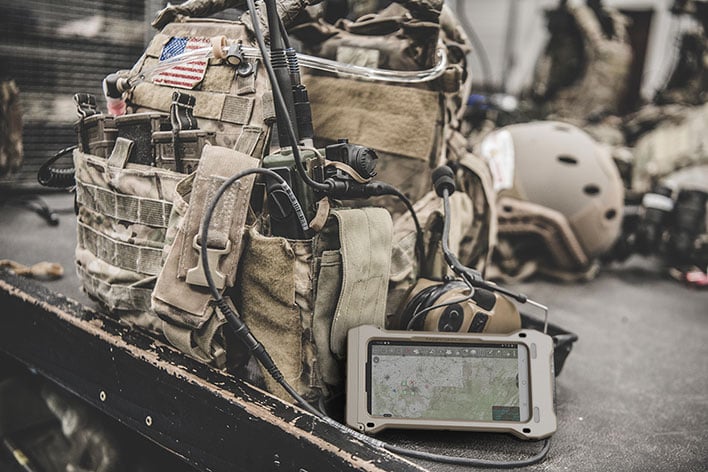 "The Galaxy S20 Tactical Edition provides the warfighter with the technology that will give them an edge in the field, while providing their IT teams with an easy-to-deploy, highly secure solution that meets the demands of their regulated environment," Samsung said.
Beyond all those rugged and security layers sits the Galaxy S20 as you know it. The phone sports a 6.2-inch WQHD+ AMOLED display powered by a Qualcomm Snapdragon 865 processor and 12GB of RAM. It also features 128GB of onboard storage (expandable to 1TB via microSD), a 10MP front camera for selfies, and three rear cameras (12MP wide-angle, 64MP telephoto, and 12MP ultra-wide angle).
Samsung did not say how much the Galaxy S20 TE costs, only that it will be available in the third quarter through "select IT channel partners."