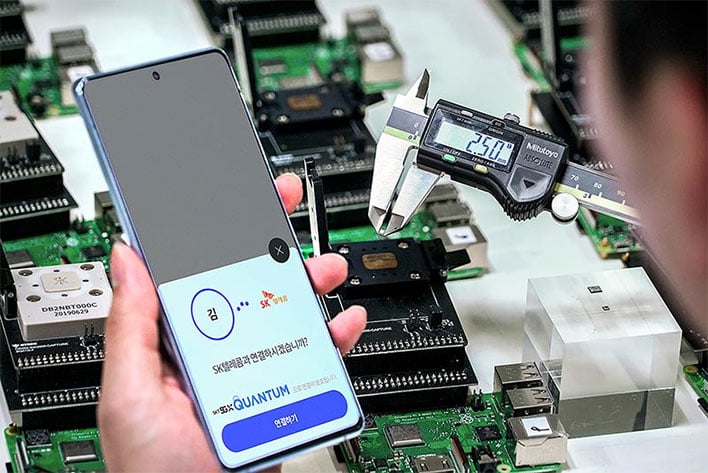 Folks, Samsung has done it! Meet the Galaxy Quantum A, the world's first smartphone with a quantum computing chip inside! It's the start of a new era! Classical computing is dead! Okay, all of that is a bit of an exaggeration. It's going to be a really long time before quantum computing is a handheld technology, no matter what is implied by the Galaxy Quantum A. So, what has Samsung really done here?
Parsing through a Google translation of SK Telecom's press release, it partnered with Samsung to launch the "world's first quantum security 5G smartphone," which certainly sounds like some fancy technology. And perhaps it is, though bear in mind that Samsung has a particular fondness for the term "quantum," as is used to described its quantum dot LED displays (QLED).
What's at play here is an apparently sophisticated random number generator (RNG) chipset, or quantum random number generator (QRNG) chipset, as the case might be.
"The latest technology is integrated into the quantum random number generation chipset, which is 2.5mm wide and 2.5mm shorter than the nails. Inside the chipset, a CMOS image sensor detects the light (photons) emitted by the LED light source. At this time, random numbers are used using the randomness of both, SK Telecom explains.
It's not a perfect translation, but the gist of it is, the Galaxy Quantum A is using light to generate random numbers. SK Telecom goes on to explain that "the number of photons detected within a certain sensor area for a certain time is unpredictable," making this a stronger security solution.
"With the advent of quantum computers that threaten existing security systems, the importance of quantum security technology to defend them is also increasing. The technology competition between spears (quantum computers) and shields (quantum security) utilizing both characteristics is accelerating," SK Telecom says.
This is part of a multi-pronged approach to making more secure payments—biometric security for logging in and blockchain technology are both at play here, in addition to the RNG providing apparently stronger encryption keys.
So no, we're not dealing with qubits or sub-zero cooling in a smartphone form factor, but light beams and a fancy way of generating random numbers.
Outside of the encryption scheme, the Galaxy Quantum A is features a 6.7-inch display powered by a Samsung Exynos 980 processor and 8GB of RAM, along with 128GB of internal storage. For taking pictures, there is a 32MP camera on the front, and three cameras on the rear: a 12MP ultra-wide angle lens, a 5MP telephoto lens, and a 5MP depth lens. It also boasts 5G connectivity.
The Galaxy Quantum A is available to preorder for 649,000 won (~$527 in US currency).