This has been a tough year for numerous reasons, and for Samsung, it is reportedly staring at a significant drop in smartphone shipments for its Galaxy S21 series, compared to the previous generation Galaxy S20 lineup. It is said the drop off is so severe that Samsung is now taking a long, hard look at its mobile division that could potentially lead to management changes.
In our Samsung Galaxy S21 5G handset review, the lowest cost option within the Galaxy S21 series, we found it to be a capable phone with a lot of features for the money. Samsung's OLED displays on its smartphones continue to impress, and paired with Qualcomm's peppy Snapdragon 888 processor, it is certainly a capable handset (though it does exhibit noticeable throttling under extended loads). 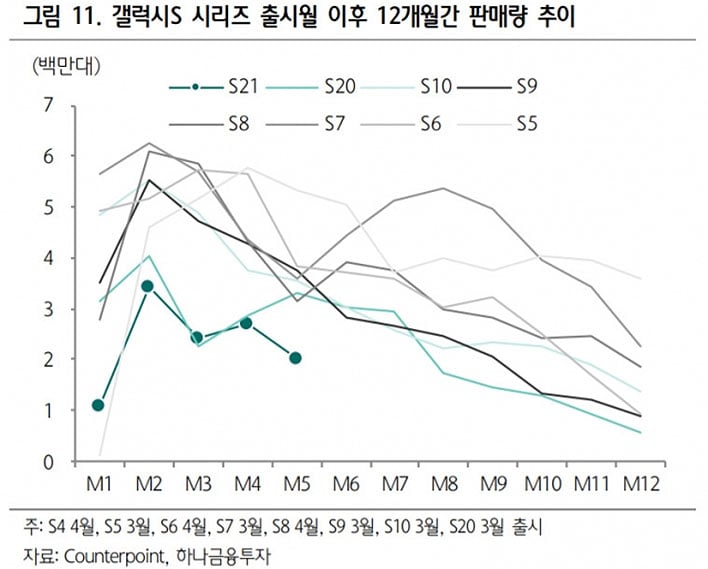 So, what's the deal? For various reasons, it seems the Galaxy S21 lineup is not making the same kind of shipment waves as past generation Galaxy phones. Data shared by Counterpoint Research indicates Samsung 'only' sold 13.5 million Galaxy S21 devices in the first six months it was out.
That is a drop off of 20 percent compared to the Galaxy S20 during its first six months, and a steep 47 percent decline compared to the Galaxy S10 series. it also ranks as the slowest sales rate since the Galaxy S5, which launched in 2014.
As a result, Samsung lost 15.7 percent of its share of the global smartphone market in June, and yielded the top position to Xiaomi in that month. Fortunately for Samsung, it still maintained its lead for the second quarter and first half of the year, though Xiaomi could potentially skip ahead in the coming quarters.
"Samsung Electronics is facing a situation in which premium brands are inferior to Apple’s ‘iPhone’ in the premium market, while the challenges of Chinese manufacturers based on cost-effectiveness are intensifying," said Kim Ji-san, a researcher at Kiwoom Securities. "In addition to cameras, performance is required in terms of premium performance, design differentiation, and expansion of ecosystems and services that will cause a consumer lock-in effect."
Samsung's upper management is apparently not pleased with the situation, and according to The Elect, top brass has extended their review of the company's mobile business. The review was initially supposed to be complete at the end of July, but sources say it is being stretched out through the month of August as well, and could perform a deeper audit of the mobile division, depending on how things go.
It's also said that this is part of a special "Business Support Task Force" review, which are types of reviews that come without warning when leadership thinks there is a problem in any given area. So it will be interesting to see what comes from all this, be it management changes, a shakeup in the product category, or whatever else.
This all comes as Samsung gets ready to host is Galaxy Unpacked 2021 event. Samsung is expected to announce several new devices, including the Galaxy Z Fold 3, Galaxy Z Flip 3, Galaxy S21 Fan Edition, Galaxy Watch 4 Classic and Galaxy Watch Active 4 wearables, and Galaxy Buds 2 earbuds with active noise cancellation.