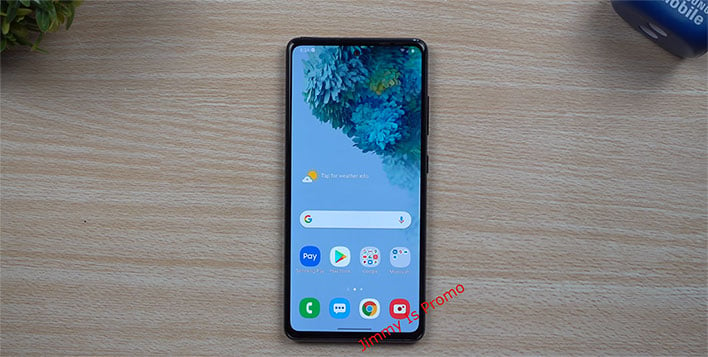 Samsung has not yet announced its Galaxy S20 Fan Edition (FE) handset, but it has already been spied in a new leak, which gives a high level overview of the phone. Two leaks, actually—one of them is a hands-on video showcasing the upcoming phone, and the other is purportedly an unreleased promotional video (or a pretty good fake).
As far as we know, this is the first look at the actual phone. Before now, we have seen some renders of the Galaxy S20 FE, which leaked to the web in August. Here is a look at the hands-on video (it's a little over 6 minutes long)...

The leaker who posted the above video, Jimmy is Promo, has also gotten his mitts on previous Samsung phones before they launched. And given that Samsung is expected to announced the Galaxy S20 FE during its Unpacked event this week (September 23), we are fairly confident this is the real deal.
According to the latest leak, the Galaxy S20 FE sports a 6.5-inch FHD+ display with a 120Hz refresh rate. That puts it in between the regular Galaxy S20 (6.2-inch display) and the Galaxy S20 Plus (6.7-inch display). And of course there is the Galaxy S20 Ultra with a 6.9-inch display.

It also sports a 4,500mAh battery that "lets you go all day [and] all night," according to the promo video.

In addition, the Galaxy S20 FE features expandable memory, a 32-megapixel front camera for taking high-resolution selfies, a triple camera arrangement (12-megapixel wide-angle, 12-megapixel ultra-wide, and 8-megapixel telephoto) with a 3x optical zoom and 10x digital zoom. When combined, this is supposed to offer a 30x "Space Zoom." And finally, the Galaxy S20 FE is said to have a "nice price" ($699 to $749).

Relative affordability comes at a cost, though. Instead of glass, the Galaxy S20 FE is said to ship with aluminum sides and a plastic back, same as the regular Galaxy S20. It also appears to have chunkier bezels, 'just' 6GB of RAM (instead of 12GB), and a lower resolution. That said, the Qualcomm Snapdragon 865 processor inside is no slouch.
Overall, it is shaping up to be an intriguing smartphone for the money. We'll know more later this week, when the Unpacked event kicks off.