If Samsung follows its past release schedule, we can expect the Galaxy S11 to make a debut in just a few months. Waiting is the hard part, obviously, though it gets easier with the cornucopia of leaks that precede these sort of things. As it were, a bunch of unofficial (but probably accurate) renders showcase what to expect, in terms of the Galaxy S11's design.
This is the latest in a growing string of leaks around the Galaxy S11. What we have are renders depicting one of the potentially five models Samsung has on tap, which are rumored to arrive in three different sizes. Here is what to expect...
The above information came courtesy of prominent leaker Evan Blass (@evleaks) earlier this month. Now a few weeks later, another prominent leaker, Steve Hemmerstoffer (@OnLeaks) has partnered with 91Mobiles to share a bunch of renders.

The thing that stands out about the renders is the punch-hole design in the front of the phone. Consistent with past rumors, the renders indicate Samsung is sort of borrowing the blueprint from its Galaxy Note 10 and applying it to the Galaxy S11. For at least one the models (and perhaps all five), the punch-hole is centered at the top of the display.

It's not clear if the top model(s) will sport a pill-shaped punch-hole to accommodate multiple front-facing cameras. Either way, we can see the general design scheme, including a full-front display that curves a bit around the edges. The curve does not appear to be overly pronounced, though.

Over on the sides, the power button and volume buttons are visible, both on the right of the phone. There is nothing of note on the left, while the bottom houses a USB-C port and a pair of speaker grills.
According Hemmerstoffer, the phone will measure 161.9 x 73.7 x 7.8 mm (or 8.9mm if factoring in the rear camera bump). He also says the Galaxy S11 will consist of a glass back and metal frame, neither of which are surprising for a flagship. 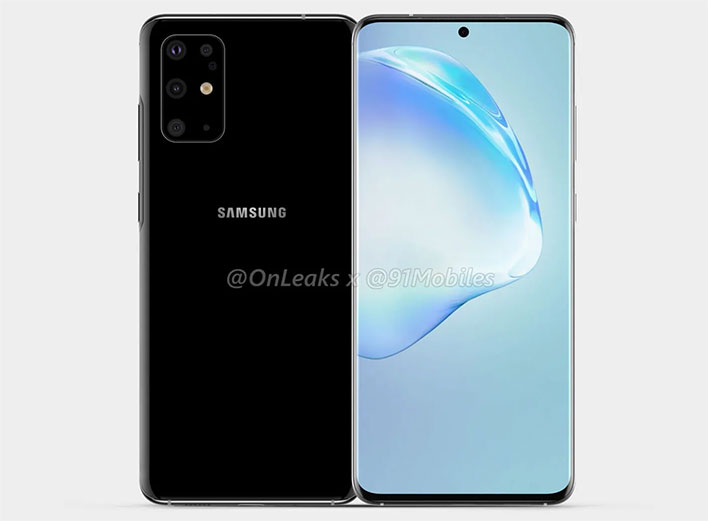 The last thing to note is the rear camera configuration. If these renders prove accurate, then Samsung will be going with a double-wide rectangular arrangement, with two columns of sensors and an LED flash. There could be as many as five camera sensors on the Galaxy S11. One of those is likely to be a 3D Time of Flight (ToF) sensor. And of course there has been plenty of chatter about the Galaxy S11 using Samsung's monstrous 108-megapixel sensor for the primary camera.
As to everything else, we'll have to wait for an official announcement, or more leaks.
Images Source: Steve Hemmerstoffer (@OnLeaks) + 91Mobiles