Data centers have a new high-tech toy to play with, courtesy of Samsung. Called the CXL Memory Expander, it sort of looks like an external storage device (from the renders) in the vein of Samsung's T7 Portable SSD, but it is nothing of the sort. This is essentially a memory expansion device that leverages the new Compute Express Link (CXL) interconnect standard.
Why not just stick with conventional DDR-based memory? Well, there is a limitation imposed by memory channels, whereas Samsung's CXL-enabled module scales memory capacity to terabyte levels, in DDR5 form to boot. In addition, Samsung says its new solution dramatically reduces system latency caused by memory caching.
CXL, by the way, is an open standard with widespread industry backing. The interconnect is based on the PCI Express 5.0 interface to enable fast communication between the CPU and other devices, including accelerators, memory buffers, and smart I/O devices, while boosting memory capacity and bandwidth above and beyond currently available solutions. 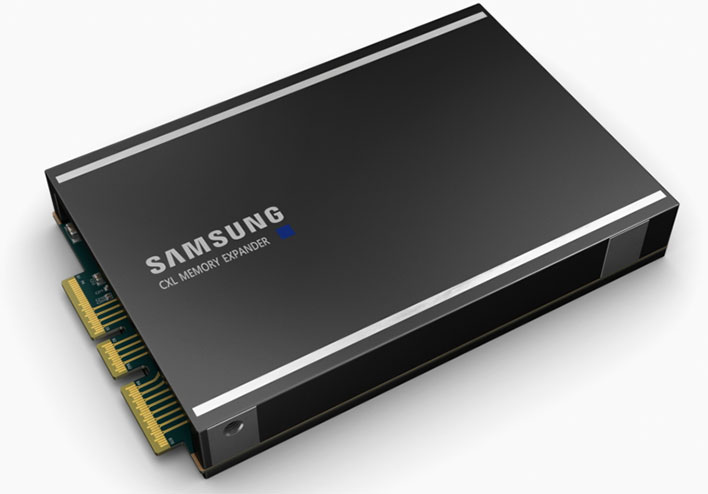 "This is the industry’s first DRAM-based memory solution that runs on the CXL interface, which will play a critical role in serving data-intensive applications including AI and machine learning in data centers as well as cloud environments," said Cheolmin Park, vice president of the Memory Product Planning Team at Samsung Electronics.
"Samsung will continue to raise the bar with memory interface innovation and capacity scaling to help our customers, and the industry at-large, better manage the demands of larger, more complex, real-time workloads that are key to AI and the data centers of tomorrow.”
Samsung says it incorporated a bunch of controller and software technologies into the design of its CXL Memory Expander, like memory mapping, interface converting, and error management. The upshot is both the CPU and GPU can recognize the CXL module as main memory. That being the case, perhaps we will see this in a consumer platform someday—16GB, 32GB, or even 64GB RAM configs are cool and all, but imagine going into terabyte territory!
That's getting ahead of ourselves, though. These modules are designed and bound for the data center. To that end, Samsung says its terabyte-level memory solution has already been validated on next-generation server platform from Intel (which we take to mean Sapphire Rapids). In addition, AMD said it is working with Samsung to bring its advanced interconnect memory solution its EPYC customers too.