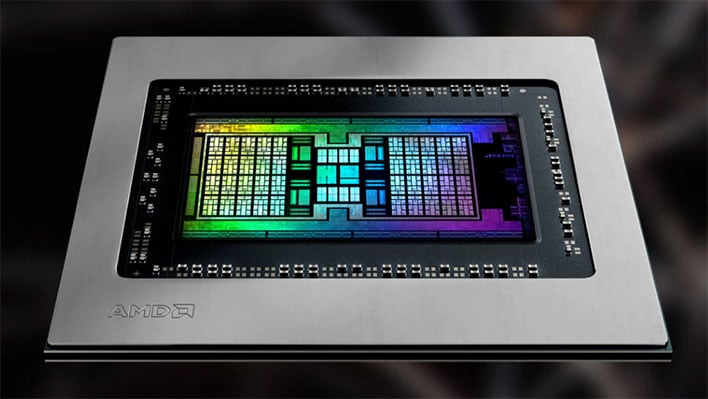 We have known for over a year and a half that Samsung intended to eventually inject Radeon graphics into its system-on-chip solutions for supercharged mobile devices, including high-end smartphones. But lest anyone forget or begin to wonder if things have changed, Samsung doubled down on those plans, though the company did not exactly tip its hand entirely.
The reiteration to eventually lean on AMD's Radeon hardware in its mobile design came during Samsung's Exynos 2100 SoC unveiling yesterday. Dr. Inyup Kang, vice president and general manager of Samsung's System LSI Business division, stated during the press event that the company's "next flagship product" would sport a "next-generation mobile GPU" from AMD.
That is where the new information begins and ends. Breaking it down, we read that to mean Samsung intends to leverage AMD's second-generation Radeon DNA (RDNA 2) architecture into whatever Exynos silicon it has up its sleeve, for whatever flagship product it has up its sleeve, presumably for release in 2022.
Technically the upcoming Galaxy S21 will be Samsung's next flagship product, but barring a big surprise, Kang is almost definitely talking about a later product. If not for next year, could he be talking about the Galaxy Note 21? Despite rumors to the contrary, it was reported last month that Samsung is not ready to kill the Galaxy Note family.
It's rumored the Galaxy S21 will feature stylus support, so one way to maintain distinction between the Galaxy S and Galaxy Note lineups is to infuse one of them with RDNA 2 graphics. However, it is also possible that Kang was hinting at the Galaxy Z Fold 3. He was just vague enough to keep us guessing.
Interestingly enough, leaked benchmarks from a purported Samsung mobile SoC with RDNA graphics popped up online. No such product based on RDNA 1 ever materialized, though, and it was never clear if the leak was legitimate or not.
In any event, the partnership is indeed real, and it is a multi-year one to boot.
"Adoption of our Radeon graphics technologies across the PC, game console, cloud and HPC markets has grown significantly and we are thrilled to now partner with industry leader Samsung to accelerate graphics innovation in the mobile market," AMD CEO Dr. Lisa Su said in 2019. "This strategic partnership will extend the reach of our high-performance Radeon graphics into the mobile market, significantly expanding the Radeon user base and development ecosystem."
We can hardly wait.