Way back at CES this year, AMD unveiled its Ryzen 6000 processors in mobile form. Using significant revisions to the Zen 3 core for power efficiency, AMD says its Ryzen 6000 mobile processors are its most efficient ever. In combination with an upgrade to the power-sipping RDNA 2 graphics architecture, these chips deliver delightfully silly amounts of both CPU and GPU performance under strict power budgets.


Intel still has an ace in the hole for business customers, of course: its VPro technology. For folks who require remote management and advanced security features, it doesn't matter how fast or efficient a competitor's processor is. Fortunately, AMD has similar features of its own in its Pro-series processors.

With that in mind, AMD is directly attacking Intel's mobile workstation market share with today's release of its Ryzen Pro 6000 chips as well as a few Pro-family 5000-series processors, just like with the CES announcement. The 6000 family sports Zen 3+ CPU cores and RDNA 2 graphics, while the 5000 chips are like other Ryzen 5000 mobile processors in that they come with Zen 3 CPU cores and Vega-based graphics. 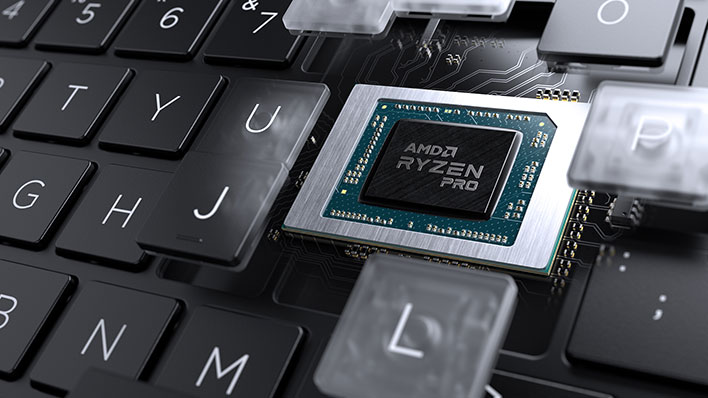 In truth, these new processors are fundamentally identical to the chips announced back at CES. You can see in AMD's slide below that each model is basically identical to a model from the standard Ryzen 6000 and 5000 mobile ranges, just with the part number incremented by 50 to indicate the Pro status. Because of that, we're not going to spend a lot of time going over the details because we've already talked about them before; you can refer to that prior coverage if you're curious. 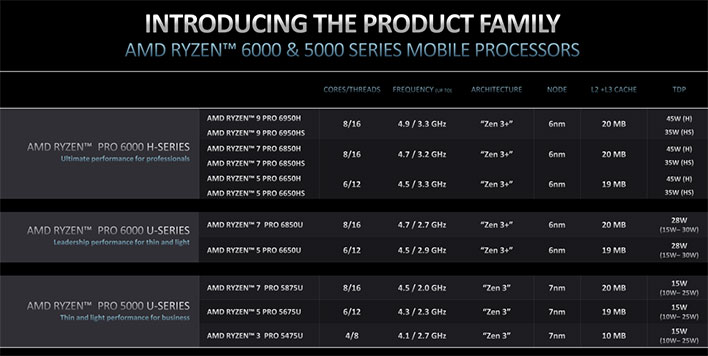 Instead, we'll take a look at exactly what makes these "Pro." AMD lays out three items that it refers to as its suite of "Pro Technologies": Pro Security, Pro Business Ready, and Pro Management. 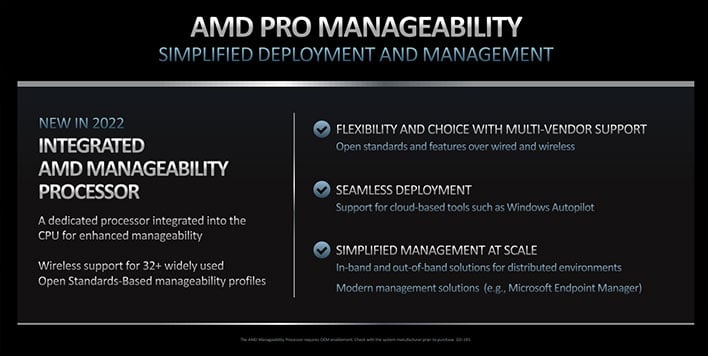 On the Management side of things, the company mentions an "integrated AMD manageability processor" but gives no details whatsoever. AMD does say that the processor supports open standards, although there's no mention of any particular standards beyond Microsoft's Endpoint Manager and Windows Autopilot. In the past, AMD has been eager to talk up the capabilities of DASH and other open management standards, so their absence here is a little surprising.

The "Business Ready" angle is much clearer. AMD notes that business customers purchasing products with Ryzen Pro processors can rest assured with 18 months of software stability, 24 months of availability, and a continuous validation process to "ensure long-term stability" and "Enterprise-grade quality." 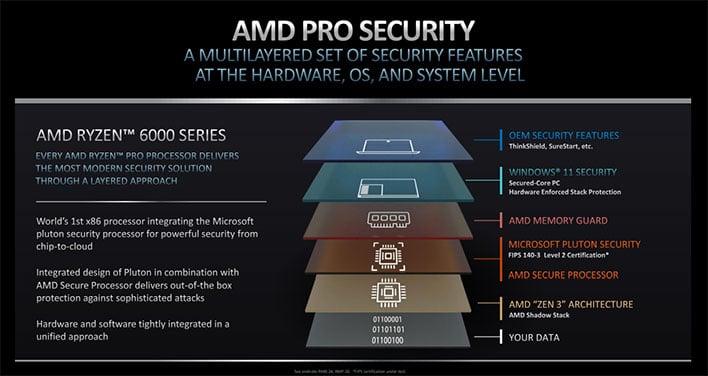 Finally, for Pro Security, AMD emphasizes its multi-layered approach, starting with OEM security features at the top, and then proceeding through Windows 11's own security concepts before arriving at various AMD-specific features including Microsoft's Pluton security processor as well as the security-conscious design of the Zen 3 processor itself. Ironically, much or most of this (including Pluton) is available on the regular Ryzen 6000 mobile parts, too. 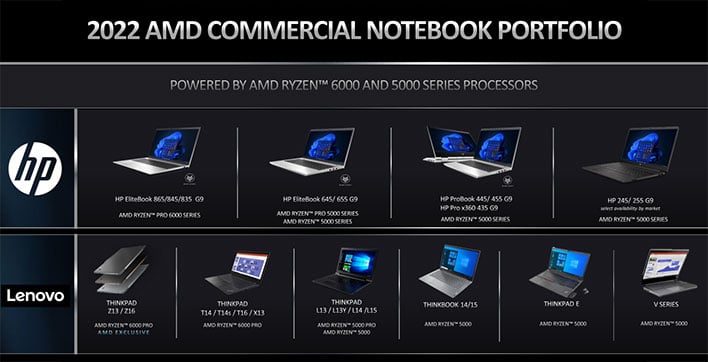 AMD emphasizes that these chips will be available this quarter in laptops from HP and Lenovo, among other partners. Perhaps of particular note is the Lenovo ThinkPad Z, which was announced at CES. Actually, we wrote up a story on it, but what we didn't know at that time is that it would be available with a customized Ryzen 7 Pro 6860Z SKU. AMD describes the ThinkPad Z as the result of "deep co-design." What that translates to in terms of unique design features or performance, you'll have to circle back for in the days ahead, with forthcoming coverage.