Intel today has extended its vPro platform into its 12th Gen mobile and desktop CPU lineup based on Alder Lake, and with the expansion comes some new features and additional segmentation for different size businesses and enterprise clients. As it pertains to the latter, Intel added a couple of new tiers, including vPro Essentials and vPro Enterprise for Chrome.
With vPro Essentials, Intel aims to extend enterprise-level security and device management capabilities to small and medium size business (SMB) customers. And as the name implies, vPro Enterprise for Chrome enables a new class of Chromebooks for businesses with enhanced security and management features not found on non-vPro platforms. Intel vPro Enterprise, meanwhile, remains the full-featured commercial option for large enterprises.
"The next gen of the Intel vPro platform was designed to deliver even greater security, performance and manageability for all businesses. And, with the introduction of 12th Gen Intel Core processors, we are reimagining the way people work with our performance hybrid architecture for business, productivity and multitasking," Stephanie Hallford, Intel vice president and general manager of Business Client Platforms, said in a statement. 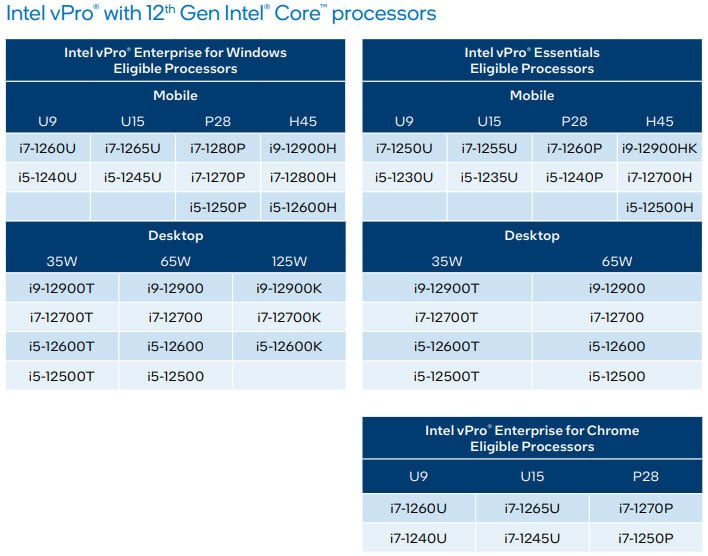 The vPro platform is essentially a cornucopia of features and technologies relevant to the business and enterprise markets, with bells and whistles to make remote management easier and more secure. You can see a list of supported Alder Lake processors above. This latest evolution builds on previously protections, such as Hardware Shield, which leverages Intel Control Flow Enforcement Technology (CET) and Intel Threat Detection (TDT) to protect against firmware and ransomware attacks. But with Alder Lake, there are some additional mechanisms in play.
One of the big upgrades is a cutting-edge anomalous behavior detection (ABD) capability to thwart supply chain-style attacks.
"This new Intel TDT detector uses AI and Intel integrated GPU performance optimizations to deliver amazing efficacy without significant impact on the user experience," Intel explains. "ABD uses machine learning algorithms, Intel Processor Trace, Last Branch Record and Performance Monitoring Unit telemetry in Intel processors to profile the normal control flow behaviors of benign applications. ABD then monitors application execution in production, and it detects control flow deviations in real-time if applications are attacked or experience unexpected errors."
There's an ABD whitepaper that gets into some of the nuts and bolts, though what's interesting is the use of AI and a PT decoder that offloads algorithms to the integrated graphics in Alder Lake, all in the pursuit of better security.

Intel also says there are new hardware virtualization and encryption capabilities to protect the operating system, applications, and data. And as for core features, Intel touts support for ECC DDR5/LPDDR5, Wi-Fi 6E, Thunderbolt 4, and 2.5Gbps Ethernet.

Regarding performance, Intel provided some internal figures. On laptops, Intel says its vPro platform with 12th Gen CPUs delivers gains over 11th Gen to the tune of 14 percent in Systemark25, 17 percent in  WebXPRT 4, and 27 percent in Crossmark. And compared to a Ryzen 7 Pro 5850U CPU, Intel touts up to 41 percent faster performance (Crossmark).
Similar performance gains are claimed on the desktop, both in comparison to the previous generation (up to 21 percent) and when pitted against ADM's Ryzen 7 5700G (up to 44 percent).
Intel says its latest vPro platform with 12th Gen silicon will manifest in over 150 designs across all form factors this year.