As the cybersecurity landscape evolves, so do the skilled attackers at every turn. Protecting devices from threats becomes a cat and mouse game, and there is always a new attack on the horizon. Security chips built into computers have tried to slow the attacks, such as Apple’s T2 chip, but even it has its flaws. Now, Microsoft is looking to build hardened security directly into the CPU while being isolated from the system. They have adapted this new system, named the Microsoft Pluton processor, from technology created from Xbox and Azure Sphere, so end-users will be more secure than ever.

According to Microsoft, “Windows 10 is the most secure version of Windows ever, built with end-to-end security for protection from the edge to the cloud all the way down to the hardware.” Microsoft aims to keep this claim as attackers rapidly evolve to meet new defense mechanisms. Therefore, with Intel, AMD, and Qualcomm, Microsoft announced the Pluton Security processor. The goal for the chip is to “bring even more security advancements to future Windows PCs and signal[s] the beginning of a journey with ecosystem and OEM partners.” 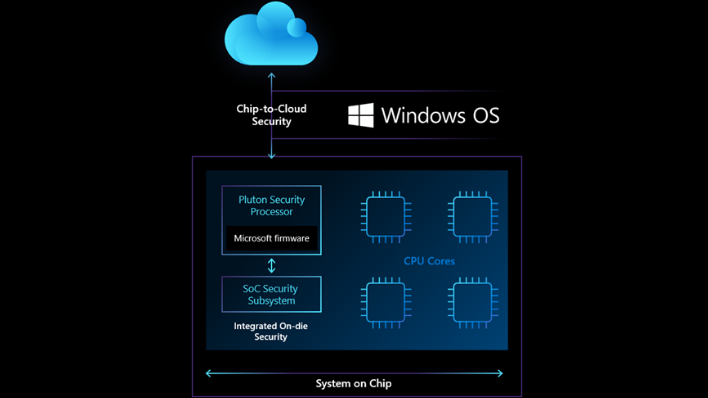 Hardware and software meet at the core of the computer, the CPU. Suppose security was built into the CPU at this intersection. In that case, it could “eliminate entire vectors of attack” and “make it significantly more difficult for attackers to hide beneath the operating system.” Moreover, it can help prevent physical attacks, credential and encryption key theft, and help recover from bugs in software.

Typically, operating system security exists on a chip called the Trusted Platform Module (TPM). While a great option in the past, the TPM is now vulnerable to physical attacks where someone could intercept data in transit to the CPU. The Pluton processor, as it would be built into the CPU, would solve this issue. Once integrated, the “Pluton architecture will first emulate a TPM that works with the existing TPM specifications and APIs, which will allow customers to immediately benefit from enhanced security for Windows features that rely on TPMs like BitLocker and System Guard.” In the future, it will do much more, such as “protect credentials, user identities, encryption keys, and personal data,” and none of this information can be extracted by malware of physical access to the PC.

Besides security, Pluton will also keep system firmware up to date, so if there a vulnerability found in the ecosystem and a patch is pushed, Pluton will take care of it. Overall, once integrated with AMD, Intel, and Qualcomm CPUs, Microsoft's Pluton will put security at the core of computing inside the CPU. Microsoft believes that “processors with built-in security like Pluton are the future of computing hardware,” and those processors are the future of making everyone more secure.