One of the last places you would expect to see a Ryzen 5000 series desktop processor is inside a Mac system. Apple is even shifting away from x86 processors altogether, having announced plans to phase out its use of Intel CPUs in favor of its own custom processors based on ARM. So what is this business about a an alleged Mac system running a Ryzen 9 5950X CPU appearing in Geekbench all about?
That is a wonderful question, and rather than drag out the suspense, we will go ahead and say we do not know for sure. We have some ideas, though, one of which is a nifty Hackintosh setup. It could also be a clever fake with some fancy editing by whoever is behind this, but where is the fun in that? This being a Hackingtosh, with an engineering sample CPU, seems a little more likely to us (though we wouldn't be the farm on this being real).

Why is that? Let's start with the Geekbench database entry, as spotted by APISAK, an eagle-eyed leaker on Twitter. Here it is... 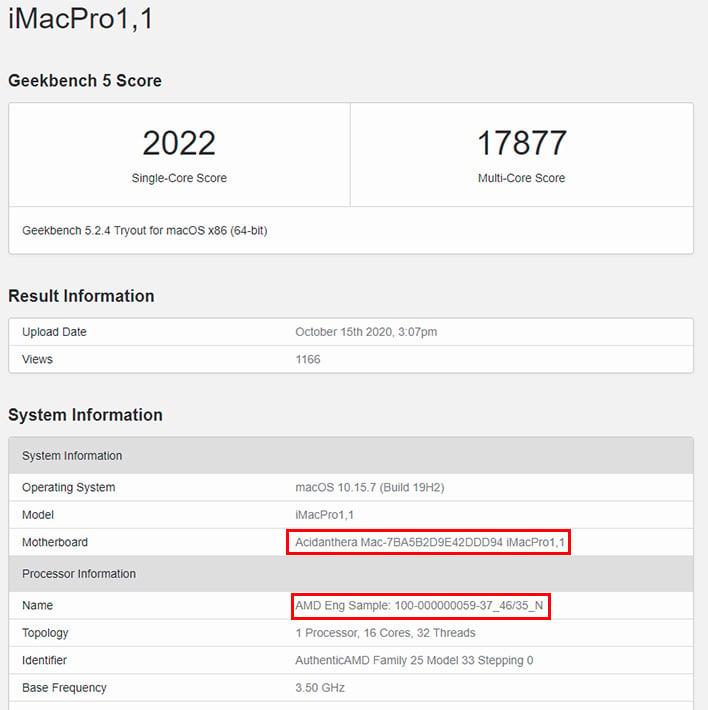 The first thing to note is the motherboard label. Geekbench identifies this system an as "Acidantheria Mac," which originates from a former Hackintosh outfit called OpenCore Computer [EDIT: Not to be confused with the OpenCore bootloader, of which OpenCore Computer had no official affiliation to]. We say "former" because OpenCore Computer's website died a few months ago.
It appears the company went out of business, perhaps because of legal pressure from Apple. Or maybe for some other reason. In any event, while we are not aware of any court cases or cease and desist communications between Apple and OpenCore Computer, Apple did previously win a permanent injunction against Psystar for selling computers with macOS installed a long time ago, just as OpenCore Computer was doing more recently.
So anyway, if this is in fact real, we are fairly confident in it being a Hackintosh. Either the folks at OpenCore Computer are up to their tricks again, or someone who already owns an OpenCore Computer system got their hands on a Ryzen 5 5950X engineering sample and upgraded their rig. But it bears repeating, that is predicated on this being a legitimate database entry, which we don't know that it is.
We definitely think it is an engineering sample (again, if this is real), based in part on the second section we highlighted above (which clearly identifies it as such). We're regular Sherlocks over here.

This could also explain the soft multi-score it posted. More on that in a moment, but first let's talk specifications and clockspeeds. The Ryzen 9 5950X is the top dog in AMD's freshly minted Zen 3 lineup, with 16 cores and 32 threads clocked at 3.4GHz (base) to 4.9GHz (max boost). It also features 64MB of L3 cache, 8MB of L2 cache, and has a 105W TDP.
Interestingly, the folks at Videocardz spotted some curious clockspeed claims in a .gb5 file containing raw JSON output from readings taken while the test was running. It indicates the chip hit 6.02GHz during the test. We're calling hogwash on this. It is technically possible that whoever is behind this benchmark run used some exotic cooling and heavy overclocking, but we strongly suspect Geekbench is just reading it wrong. The scores bear this out, when compared to a Ryzen 9 3900X. Have a look... 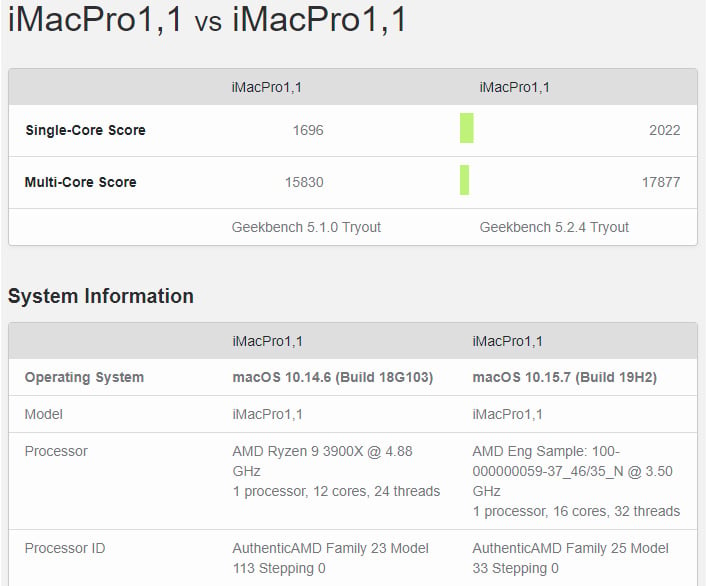 The Hackintosh with the Ryzen 9 5950X posts a single-core of 2,022, which is around 19 percent higher than the Ryzen 9 3900X—right in line with AMD's claimed 19 percent IPC (instructions per clock) performance uplift over Zen 2. However, the multi-core of 17,877 is around 12.9 percent higher. The performance scaling is not quite the same.
It would not necessarily have to be, but that still seems little low to us. The likely explanation? Since it is running on Hackintosh software, it might not be handling OS threading, scheduling, and so forth as well as it should. Hence why the multi-core score would be a little gimped.
This all assumes the listing is really representative of what it says it is, and of course we can't say for sure. It is at least plausible, but as with any leak of unreleased hardware, a dose of skepticism is recommended.