It looks like AMD is having a blowout sale of sorts on its Ryzen 5000 series processors, through its retail partners. Not that Zen 3 is being discontinued or anything (we still have several months before Zen 4 arrives). However, there are some deep discounts at play right now, the most enticing of which applies to its flagship Ryzen 9 5950X.
You can snag the Ryzen 9 5950X for $599 at Amazon (save $200 over MSRP). Granted, it's not exactly a budget purchase, but that's a 25 percent markdown from the list price for AMD's top consumer silicon. This is also the lowest price we have ever seen this chip sell for. It's even cheaper than what you'll find at Micro Center, which often undercuts the competition but for in-store purchases only.
If you're considering this chip, then you likely already know the specs. But to quickly recap, this is a multi-core beast with 16 physical cores and 32 threads of Zen 3 muscle, running at 3.4GHz (base) to 4.9GHz (max boost). It also features 8MB of L2 cache and a generous heaping of 64MB of L3 cache. See our Ryzen 9 5950X and 5900X review to see what this chip is capable of. 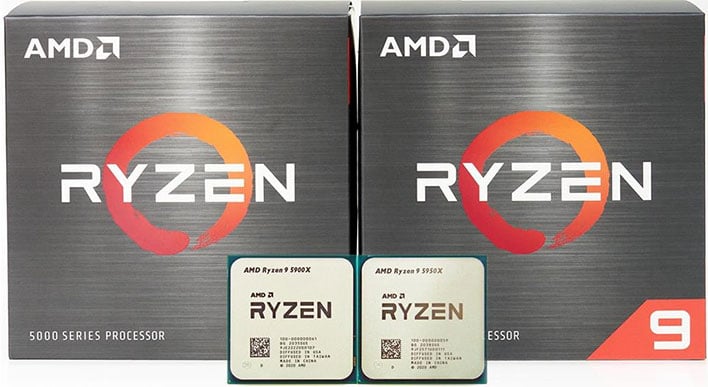 Speaking of the AMD Ryzen 9 5900X, that one is on sale as well, marked down to $449 at Amazon (save $120.99 over MSRP). Pricing has been up and down on this one, and this latest discount is once again the lowest price we've seen for this SKU.
This is another burly Zen 3 processor, too. It's a 12-core/24-thread chip that isn't going to trip over multi-threaded workloads, with a 3.7GHz base clock and 4.8GHz max boost clock, along with 6MB of L2 cache and 64GB of L3 cache.
Here's a look at current pricing for AMD's Zen 3 processors...

Note that we're quoting savings over each processor's list price. We've also included AMD's APU lineup based on Zen 3, though those prices have been fairly consistent. The most compelling bargains apply to the Ryzen 9 5950X, Ryzen 5900X, and Ryzen 5 5600X, in that order.
The timing of these discounts (particularly at the high end) might suggest that AMD's Ryzen 7 5800X3D is about to land at retail. That chip introduces stacked 3D V-cache to the equation, with AMD claiming it will deliver a 15 percent performance gain in games. If so, that would be roughly on par with what a generational upgrade delivers.
Even so, the Ryzen 9 chips are still attractive propositions, as both wield more cores and threads, now at all-time low prices.