Just a couple of weeks ago, AMD fleshed out its still-emerging Ryzen 4000 series of mobile processors based on its Zen 2 CPU architecture, with a couple of top-end parts—the Ryzen 9 4900H and Ryzen 9 4900HS. They sit at the top of AMD's mobile stack and are bound to arrive in laptops next month. To pass the time, we can take a peek at potential performance, thanks to a newly leaked 3DMark benchmark listing. Specifically, a pair of benchmark runs pits the Ryzen 9 4900HS against the Ryzen 7 4800U.

All of these processors sport integrated graphics based on AMD's Vega architecture, with varying numbers of compute units and GPU clocks. The main thing to keep in mind, however, is that the H-series lineup is intended for higher-end laptops, such as those that will be used for gaming, while the U-series chips are bound for thinner and lighter machines.
All of that out of the way, let's have a look at the leaked 3DMark listing. 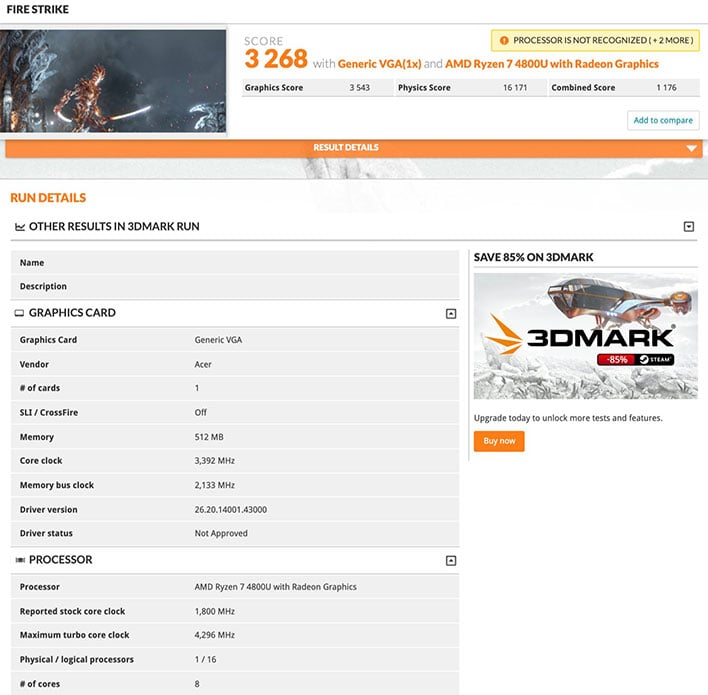 The Ryzen 7 4800U is the highest-end processor among AMD's Ryzen 4000 mobile U-series. It has 8 cores, 16 threads, and 8MB of L3 cache, just like the Ryzen 9 4900HS, and on the GPU side, both processors sport 8 CUs clocked a 1,750MHz.
In this particular benchmark run, the Ryzen 7 4800U posted a 3,543 Graphics score and 16,171 Physics score. While not shown, the source of the leak (@_rogame) says a Ryzen 9 4900HS on 3DMark posted a 4,085 Graphics score and 21,289 Physics score.
We have to be careful not to read too much into these scores, for a variety of reasons. Looking just at the numbers, though, the Ryzen 9 4900HS listing shows a greater than 15 percent higher Graphics score, and nearly 32 percent higher Physics score.
These are at least plausible differences, if nothing else. The Ryzen 9 4900HS is working with a higher TDP, which could theoretically help it maintain boost clocks for longer periods of time. So even though the GPU arrangement is the same in both chips, the higher-end part still holds an advantage.
All that said, the real fun will begin when laptops built around these processors show up in volume, along with models based on Intel's upcoming Comet Lake-H CPUs.