Intel has closed the books on what it called a "strong first-quarter," during which it generated $19.7 billion in revenue. That's actually down 1 percent compared to the same quarter a year ago, or flat if going by the non-GAAP total ($18.6 billion). However, its first-quarter revenue exceeded January guidance by a hefty $1.1 billion, bolstered by strong PC demand.

In a statement on the latest earnings report, Intel CEO Pat Gelsinger said this is a "pivotal year" for the company, while noting a positive response to its new IDM (Integrated Device Manufacturing) 2.0 strategy.

What exactly is that? In short, IDM 2.0 is a three-pronged strategy consisting of expanding its internal network of chip fabs, making use of third-party fabs as needed, and establishing Intel Foundry Services to service external customers around the globe.
"The response to our new IDM 2.0 strategy has been extraordinary, our product roadmap is gaining momentum, and we’re rapidly progressing our plans with re-invigorated focus on innovation and execution. We are setting our strategic foundation and investing to accelerate our trajectory and capitalize on the explosive growth in semiconductors that power our increasingly digital world," Gelsinger said.
Everything we've heard from Gelsinger up to this point has us optimistic about Intel's future. It's no secret that Intel has seen its struggles, with rival AMD gaining momentum and chipping away at the company's overall market share. Intel needs to execute like it did in the old days, and Gelsinger appears to be the right person for the job. 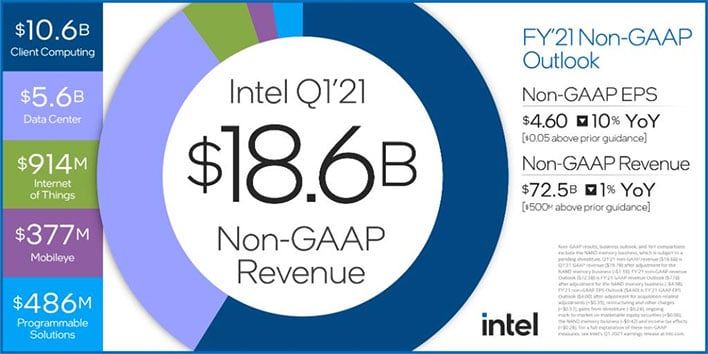 Despite Intel's struggles, however, the company's earnings reports have consistently been strong, even when the numbers are down. In this case, it posted a first-quarter profit of $3.4 billion. That's down 41 percent from a year ago. Intel's net income was impacted by VLSI winning a $2.18 billion patent infringement verdict in March, otherwise the drop would have been far less steep.

Intel saw its Client Computing Group jump 8 percent to $10.6 billion in the first quarter. The company says PC unit volumes were up 38 percent year-over-year, while notebook volumes set a new Intel record. This is almost definitely due to the increased trend towards working and educating remotely during the pandemic.
The first-quarter earnings report also highlights $5.6 billion in data center revenue, albeit that's down 20 percent. This is probably the reason why Intel's stock is down by more than 6 percent at the time of this writing.
Looking ahead, Intel and AMD both face challenges with a lingering chip shortage that could last for years.

"The unprecedented demand for semiconductors has stressed supply chains across the industry. We have doubled our internal wafer capacity the last few years, but the industry is now challenged by a shortage of foundry capacity, substrates and components," Gelsinger stated during an earnings call.
He also said it will likely "take a couple of years for the ecosystem to make significant investments to address these shortages," while noting that Intel is "working aggressively" in that regard.