The war is on, and consumers are winning. In this CPU battle, the second volley has been sent. The first was the well-received launch of the Intel Alder Lake CPU family. We found the Core i9-12900K and the Core i5-12600K to be impressive desktop processors worthy of our Recommended stamp. However, the competition isn't laying down, and one of the quickest ways to retaliate is price reductions. In fact, AMD Ryzen 5000 Series CPUs are getting blown-out at Microcenter right now. It's worth mentioning that this is an in-store-only pricing situation, as is usually the case with Microcenter, but that doesn't mean the savings aren't still pretty great, if you don't mind driving to a local store.

Some Ryzen 5000 Series CPUs may have fallen victim to competitive Intel Alder Lake CPU, but it wasn't exactly a blood-bath. The Zen 3 based processors are still great options, and their combined cost savings with sometimes less expensive total platform costs keep them relevant. Of course, the usual combo savings are still going on, but the steep discount that's been extended to the Ryzen 7 5800X is substantial The Ryzen 7 5800X packs in 8 Zen 3 cores and 16 threads with a chunky 32MB of Game Cache and tops out at 4.7GHz, still resulting in one of the faster gaming processors on the market, and typically retails for an MSRP of $449. Microcenter said to heck with that, we've got stock to move and has slashed it to just $299, and that's a savings of $150. It might just be worth a road trip even if you're a few hours away from a Microcenter. 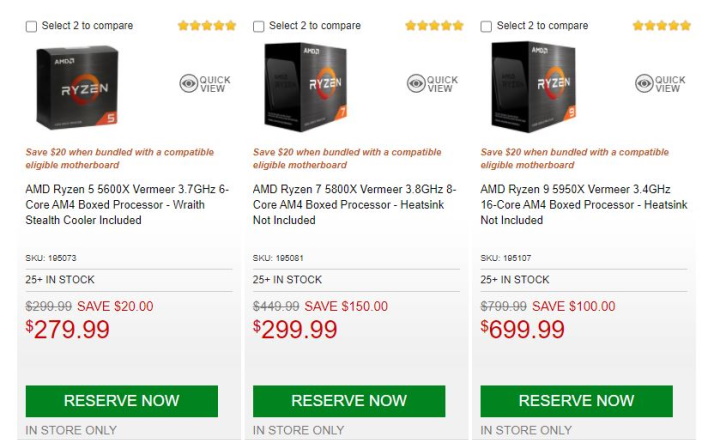 If neither of these chips is up to your standard, and you're in need of some serious multithreaded fire-power then the Ryzen 9 5950X, the big boy, is on sale as well. The Intel Core i9-12900K may have breezed past the beefier Zen 3 chip in some of the benchmarks, though still wasn't able to topple it in every single metric. The Ryzen 9 5950X features 16 Zen 3 cores and 32 threads operating at a peak speed of 4.9GHz paired with a massive 64MB of cache, is a force to be reckoned with. This is far from a cheap chip, but Microcenter has knocked off $100 from its MSRP resulting in a sale price of $699 for those who want to tackle more heavily threaded workloads like content creation, etc.