This is a story we've all heard several times by now: next-generation GPUs are going to be even bigger, hotter, and more power-thirsty than the beastly boards of today. It seems like that may be true of some more than others, though.


We heard back in the middle of March that NVIDIA could be preparing a top-end Ada Lovelace GPU that draws so much power it won't be satisfied with a single 12VHPWR connector. That plug is capable of delivering 600 watts, for context; with the PCIe slot included, that's a 675-watt maximum. At that time, even the people sharing that information—regular leakers kopite7kimi and Greymon55—were skeptical of the idea. 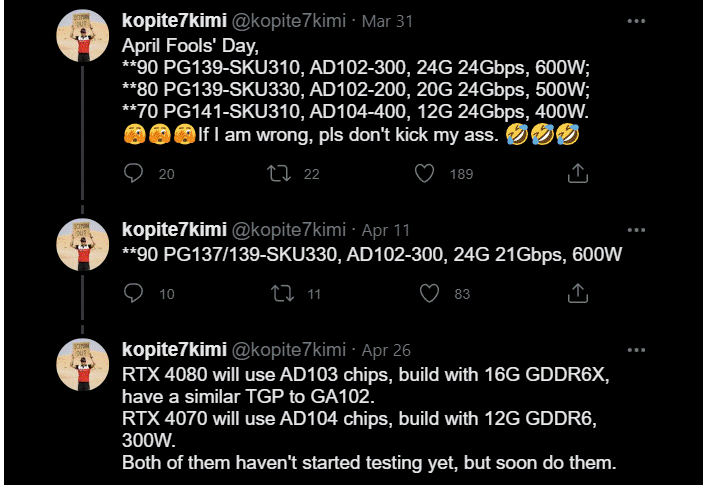 
Yesterday, he revised that prediction to put the RTX 4080 on a smaller AD103 die, and said that that part will have a similar total graphics power (TGP) to GA102, which powers everything in the GeForce RTX 3000 series from the RTX 3080 on up. If that's accurate, that would mean that each model from GeForce RTX 4070, 4080, and 4090 will be using a different die, which would be highly unusual.

However, the real juicy tidbit came in a second tweet after that one, where kopite7kimi stated that "there is another full-fat AD102 SKU with 900W TGP, 48G 24Gbps GDDR6X, 2*16pin, and higher frequency." In other words, we'd be looking at a GeForce RTX 4090 Ti (or possibly some kind of Titan-branded card) using the same GPU die as the RTX 4090, but clocked to the ceiling.


Kopite7kimi says that this product exists in test form, but admits that he does not know—by stating that no one knows—whether this configuration will appear in an actual shipping product. We, like most of the enthusiast market, are already balking at the expected 500 to 600 watt power draw of the RTX 4080 and 4090; to go even further beyond, all the way to 900 watts, is so extreme it beggars belief.

We might know the details sooner than later—kopite7kimi also said that AD102 entered testing on April 18th, so barring major manufacturing issues, we're surely on track for new GeForce GPUs within the next six months.