Rockstar Games did PC gamers a solid last month by porting over Red Dead Redemption 2, which had been sitting pretty on PlayStation 4 and Xbox One consoles for over a year. It's even prettier on the PC with the coats of polish the developer added. Though it's only been available on PC a short while, it's already deeply discounted.
As other digital distribution platforms have done, Epic Games has kicked off its "Holiday Sale 2019" with discounts on a bunch of games. Red Dead Redemption 2 stands out because it's a new title (to PC), and is marked down 20 percent to $47.99. However, it gets even better—Epic Games is offering a $10 off coupon on your first purchase during the Holiday Sale.
That means you can snag Red Dead Redemption 2 for just $37.99 at the Epic Games Store. 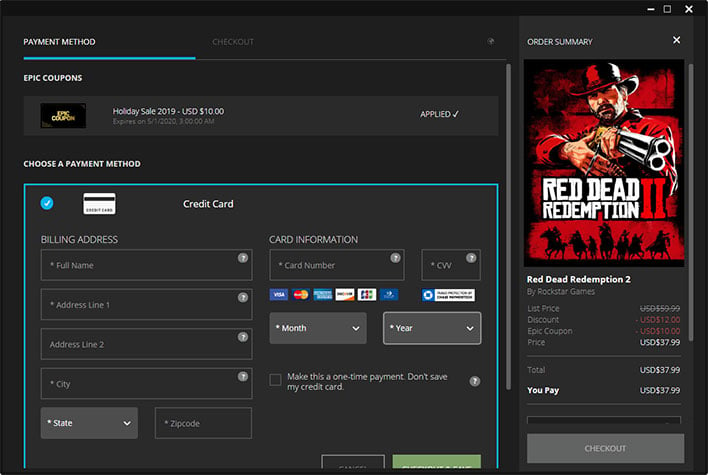 That's the lowest price we've seen it go for on the PC platform. It's a heck of a deal for one of the most popular games right now, as you're saving around 36 percent off the regular price. The coupon is automatically applied at checkout—just add the game to your cart and navigate to the checkout screen, as shown above.
The Special Edition with exclusive content for Story Mode is on sale as well, for $59.99 (down from $79.99), or $49.99 with coupon. And same goes for the Ultimate Edition with additional online content, which is marked down to $74.99 (down from $99.99), or $64.99 with the coupon.
You don't have to use the coupon on Red Dead Redemption 2—it works with other games as well. Here are a few example...
The sale sees discounts of up to 75 percent off, and that's before using the coupon. Just note that the coupon is good for a single use.
In addition to all this, Epic Games is running a "12 Days of Free Games" promotion for the holidays. At the time of this writing, you can snag Little Inferno for free (it lists for $14.99).
Happy holidays, folks, and happy gaming!