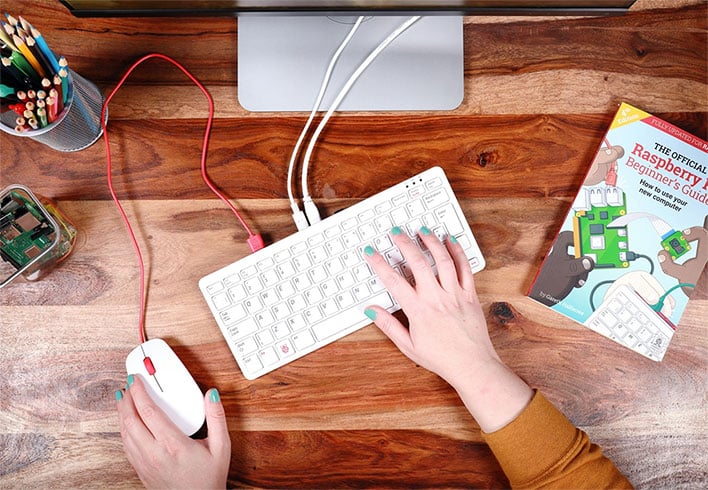 The Raspberry Pi Foundation made a splash in the mini PC scene with the Raspberry Pi, a tiny and affordable board that lends itself to all kinds of do-it-yourself (DIY) projects. Perhaps in a bid to get more people invested in the mini PC scene, the company has now launched the Raspberry Pi 400, which is basically a Raspberry Pi 4 stuffed into a compact keyboard.
In a way, this hearkens back to the Commodore 64, the best-selling single PC model (by some accounting methods) of all time. Except the Commodore 64 was comparatively chunky and obviously from a much different era. But it was also a complete PC housed in a keyboard, which you then connected to a TV or monitor.
Likewise, the Raspberry Pi 400 is PC of a different sort, with modern I/O connectivity options. As the developers note, there is more to a user friendly offering than just raw performance—the form factor matters as well.

"In particular, having fewer objects on your desk makes for a simpler set-up experience. Classic home computers—BBC Micros, ZX Spectrums, Commodore Amigas, and the rest—integrated the motherboard directly into the keyboard. No separate system unit and case; no keyboard cable. Just a computer, a power supply, a monitor cable, and (sometimes) a mouse," The Raspberry Pi Foundation states in a blog post.
Sitting inside this PC is a purpose built board that is based on the 4GB version of the Raspberry Pi 4, with the same quad-core Arm Cortex-A72 processor (but clocked at 1.8GHz instead of 1.4GHz), and same features and capabilities. The GPIO pins remain accessible, so there is room to grow beyond the keyboard-PC form factor, if you choose.
Connectivity options include two micro HDMI outputs, two USB 3.0 ports, a solo USB 2.0 port, GbE LAN, and Wi-Fi 5 (802.11ac) + Bluetooth 5 on the wireless side. It draws power from a USB-C port.
The $70 price tag seems pretty reasonable. There is also an $100 Raspberry Pi 400 PC kit, which ups the ante with an official Raspberry Pi USB mouse, official USB-C power supply, SD card with Raspberry Pi OS pre-installed, a micro-HDMI to HDMI cable, and the official Raspberry Pi Beginner's Guide. Good stuff.