NVIDIA already came out and launched its GeForce RTX 30 series, consisting initially of the GeForce RTX 3090, GeForce RTX 3080, and GeForce RTX 3070, two of which we have already ran through the benchmark ringer, with superb performance. The ball is now in AMD's court to respond. That response will come in the form of Big Navi, and some supposedly early benchmarks look promising, at least in rasterized graphics.
AMD will officially step into the next-gen GPU ring with its Radeon RX 6000 series, launching next week. Ahead of the launch, AMD teased the performance of its Big Navi offering when announcing its Zen 3 CPUs, showing off a bit of Borderlands 3 gameplay running at a 4K resolution, along with some benchmarks showing Call of Duty: Modern Warfare and Gears of War 5, both also at 4K. Here is a look... 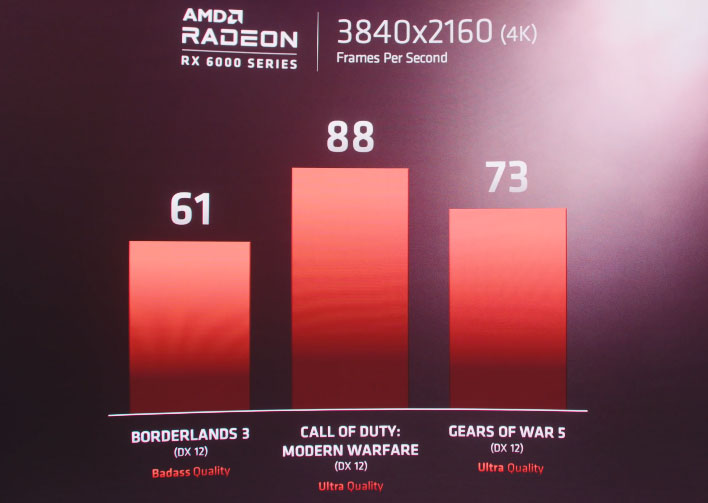 That at least gives us something to chew on while we await AMD's full reveal, but if you are still hungry for more benchmark data, the leak and rumor scene is serving up a few additional nuggets to nibble on. Just make sure to add the usual sprinkling of salt before digesting.
Igor Wallossek at Igor's Lab obtained the benchmark data from a source who said the numbers come from an add-in board (AIB) partner that manufactures both AMD and NVIDIA graphics cards. What they purport to show is an engineering sample of a Radeon RX 6800 XT beating the GeForce RTX 3080 Founders Edition and GeForce RTX 2080 Ti Founders Edition in a couple of 3DMark tests, and losing in a ray-traced benchmark.
Here's a look... 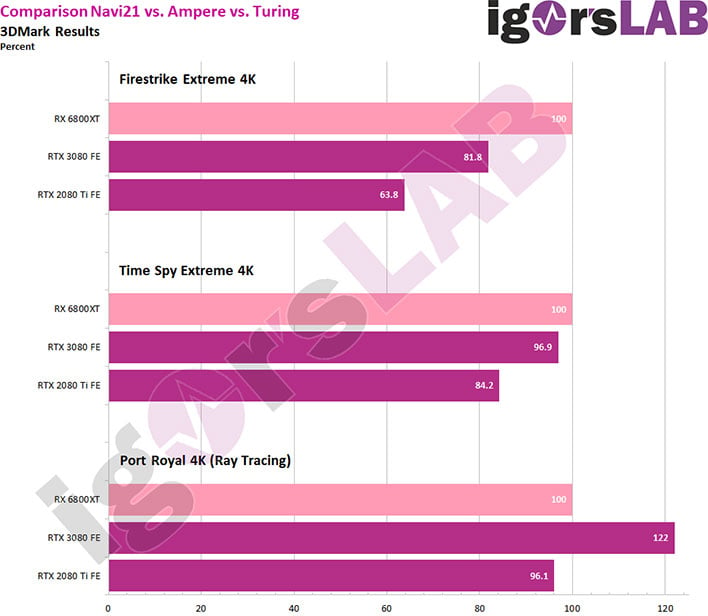 The results are presented in percentages, and they indicate the Radeon RX 6000 XT scored 18.2 percent higher than the GeForce RTX 3080 FE in the Fire Strike Extreme benchmark, and 3.1 percent higher in the Time Spy Extreme test. In Port Royal, however, it trailed by 22 percent. So at least according to this data, the Radeon RX 6800 XT is faster than the GeForce RTX 3080 FE in rasterized rendering and slower in ray-traced rendering.
Interesting stuff, but there are more numbers to swallow, if you fancy a taste for unofficial data. Twitter user @harukaze5719 plucked figures from @KittyYYuko that also supposedly come from a Radeon RX 6800 XT with 80 compute units, and graphed them out... 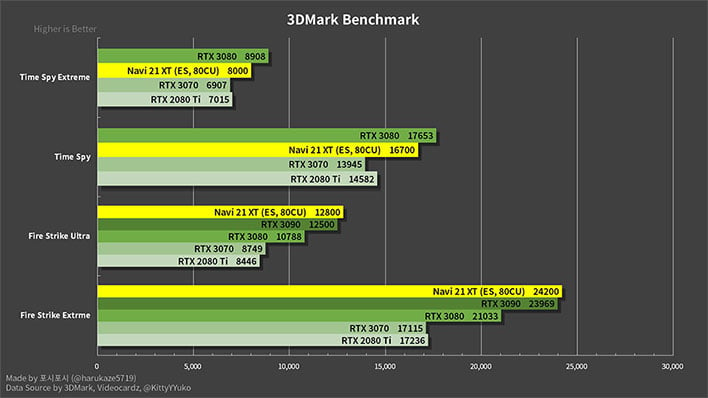 In this breakdown, the Radeon RX 6800 XT beats both the GeForce RTX 3080 and GeForce RTX 3090 in Fire Strike Ultra and Fire Strike Extreme, and loses to the GeForce RTX 3080 in Time Spy and Time Spy Extreme. Other leakers chimed in and said the data looks the same as they what they obtained from unnamed sources as well.
We caution against putting too much stock into any of this, because it's all leaked data. Clockspeeds, drivers, and other testing conditions can impact results, and that all assumes these scores were even obtained with a Big Navi card.
Nevertheless, it is interesting, and has whet our appetite for the actual launch on October 28.