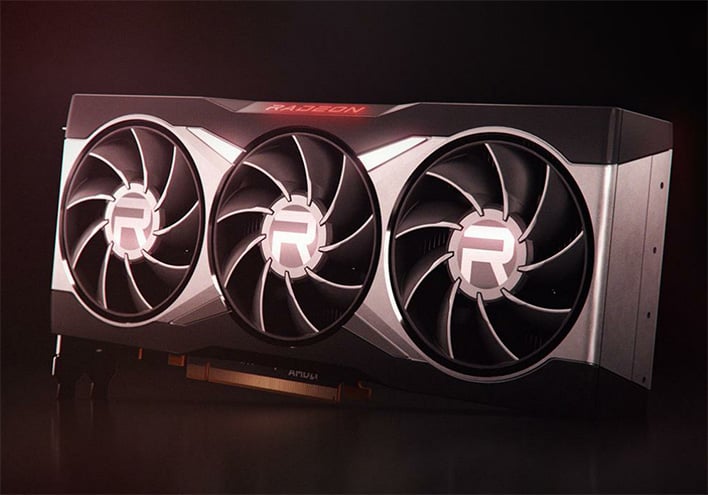 In exactly one week from now, AMD will unveil its Radeon RX 6000 series lineup, whatever that might ultimately consist of, finally putting to rest the bulk of related rumors and leaks. All we can say for 100 percent certainty right now is that the new cards will be based on AMD's RDNA 2 graphics architecture. That said, a roundup of leaks suggest the highest-end variants will be monster GPUs.
Let's hope that is true, because we sorely need some competition in the high-end GPU space. For the past several years, NVIDIA has dominated the sector, with Pascal, Turing, and now Ampere. NVIDIA's latest generation GeForce RTX 30 series is a formidable lineup, setting a high bar for AMD to meet, exceed, or fall short of, depending on how things go.
So, how exactly will things go for AMD and its Radeon RX 6000 series? Obviously we are not equipped to answer the million-dollar question just yet. Only AMD and perhaps a spattering of individuals outside the organization know for sure.
Be that as it may, prominent leaker Coreteks "did some research into drivers and other documents and also reached out to a few sources," and then compiled the various information into a tidy list of specifications. Starting at the top, where the information is the most elusive right now, here is what he claims will comprise the Radeon RX 6900 XT...
We discussed the power requirements yesterday in a separate article, noting that a leak suggesting Navi 21 XT will have a 235W power envelope is incorrect because it tells part of the story. Igor Wallossek at Igor's Lab took a deeper dive into the power structure, and determined that we'd be looking at a 320W TBP, same as the GeForce RTX 3080.
The faster clocks of the Radeon RX 6900 XT and its Navi 21 XTX should bump the TDP even higher. Coreteks lists at least 300W, though if the previous breakdown is correct, it is likely to be around 355W.
In any event, the card is rumored to hammer gaming and graphics workloads with 80 CUs. For reference, the Radeon RX 5700 XT 50th Anniversary Edition wields 40 CUs with a 1,680MHz base clock, 1,830MHz game clock, 1,980MHz boost clock, 8GB of GDDR6 memory (14Gbps), and a 256-bit memory bus. Twice as many CUs on a new graphics architecture with faster clocks is enticing.
Moving down the list, here is the rumored breakdown of the Radeon RX 6800 XT...
It is a similar configuration, but with a few less CUs and slower clocks. As to the performance, it is reported to be outgunning the Radeon RX 5700 XT by around 50 to 55 percent on early test drivers. That is a little disappointing, considering there is an 80 percent jump in the number of CUs, plus whatever benefits the upgraded architecture brings to the table. But hey, this is all unofficial information. Even if everything is dead-on accurate, updated drivers could make a world of difference.
Finally, here are the rumored specifications for the Radeon RX 6800...

This is the card that could end up being a good value for gamers who want to play at 1440p, and maybe even dip their toes into 4K territory, depending on the title. Of course, the big question is how it will it compare to the GeForce RTX 3070, both in performance and price. Time will tell.
It is going to be an interesting showdown between AMD and NVIDIA in the graphics space, starting when AMD announces its next-gen lineup on October 28.