It has been a couple of months since AMD expanded its RDNA 2 graphics architecture over to laptops with the Radeon RX 6000M lineup, and we're excited to see how the mobile GPUs compare to the competition. The competition, of course, primarily being NVIDIA's mobile GeForce RTX 30 series of GPUs. Well, an early glimpse suggests that at least one of the Radeon RX 6700M configurations might be a tad snappier than a GeForce RTX 3070 in some cases.
There are multiple caveats to consider, and we'll get to those in a moment. First, let's talk about the benchmark leak. A user at the Zhihu forums claims to have procured an MSI Delta 15 laptop equipped with a Radeon RX 6700M GPU and Ryzen 9 5900HX processor, and compared the figures to results obtained from a Razer Blade 14 laptop with the same core hardware.
Caveat number one is that the benchmark data comes from a forum user, so obviously we are not in a position to vouch for the results. Secondly, the user is not sure of the GPU's power config. There are three possible TGPs—80W, 110W, and 135W—and considering the GPU power peaks at 115W, we are probably looking at the 110W version.
That's being compared to a GeForce RTX 3070 mobile GPU at 80W, which is the lowest TGP for that GPU (OEMs can configure it from 80-125W, depending on cooling and the desired clockspeed). So that's something to keep in mind when looking at the results. 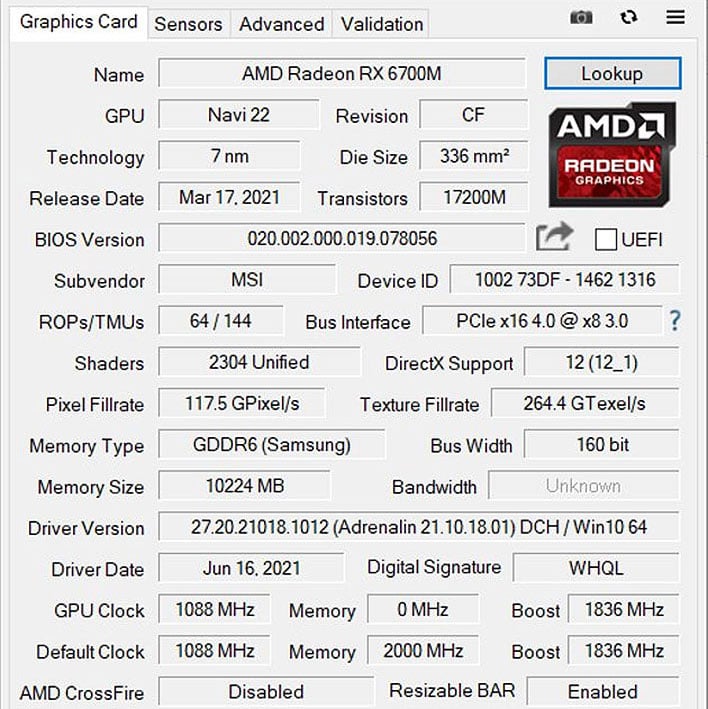 To kick things off, the user posted a set of 3DMark Time Spy benchmark scores. The first one was obtained with an older driver, and it had the laptop posting an overall score of 9,282. Then with an updated Adrenalin driver, the laptop's Time Spy score jumped to 9,873. Not bad for nothing more than a driver update.
The more interesting stuff, however, pertains to the comparison data. Have a look...

Looking at the roundup of leaked Radeon RX 6700M benchmarks, we see it generally topping the mobile GeForce RTX 3070 (80W config) at 1080p. save for League of Legends, Metro Exodus, and Gears 5. The biggest gap is observed in Hitman 2, in which the Radeon RX 6700M is nearly 30 percent faster.
Bear in mind that if these results are accurate, they are taken from two different laptop models with different cooling profiles and characteristics. We're also looking at different TGPs—probably 110W for the Radeon RX 6700M, and 80W for the GeForce RTX 3070. And these are only 1080p results at unknown quality settings, without real-time ray tracing thrown into the mix.
All that said, these are encouraging benchmark results, if accurate. They show the Radeon RX 6700M performing very well at 1080p in a thin and light gaming laptop, with some performance left to be tapped into at 135W. We'll reserve judgement until we've had a chance to test the mobile GPU for ourselves in different laptop configs, but as it stands, it looks like gamers on the go are in good shape this round.