AMD is looking to make a splash in the mobile gaming market with its recently introduced Radeon RX 6000M lineup for laptops. Based on the same second generation Radeon DNA (RDNA 2) architecture as its desktops Radeon RX 6000 series, the mobile GPUs look promising on paper. How do they perform in the real world, though? Some leaked benchmarks of a supposed Radeon RX 6600M may give us an idea.
That is one of three mobile GPUs that comprise the Radeon RX 6000M series at the moment, the other two being the Radeon RX 6700M and Radeon RX 6800M. Here's a quick and dirty specification comparison of the three...
The Radeon RX 6600M is powered by a Navi 23 GPU, though not a completely unfettered one. A full Navi 23 GPU serves up 32 compute units and 2,048 stream processors, whereas the version powering the Radeon RX 6600M features 28 compute units and 1,792 stream processors. So it is a little bit cut down. Even so, leaked benchmarks suggest it puts up a pretty good fight against NVIDIA's GeForce RTX 3060 mobile GPU, based on Ampere.
How good of a fight? The folks at Zhuanlan seem to have gotten their mitts on a laptop with a Radeon RX 6600M GPU inside, paired with a Ryzen 9 5900HX. The system is possibly an HP Omen 16, which is confirmed to sport the same GPU and CPU combination. 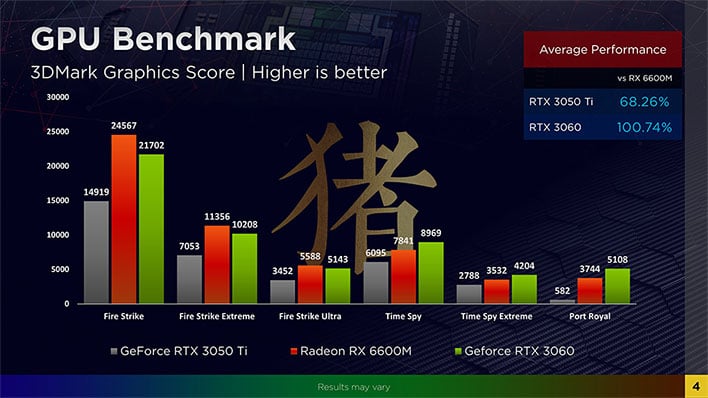 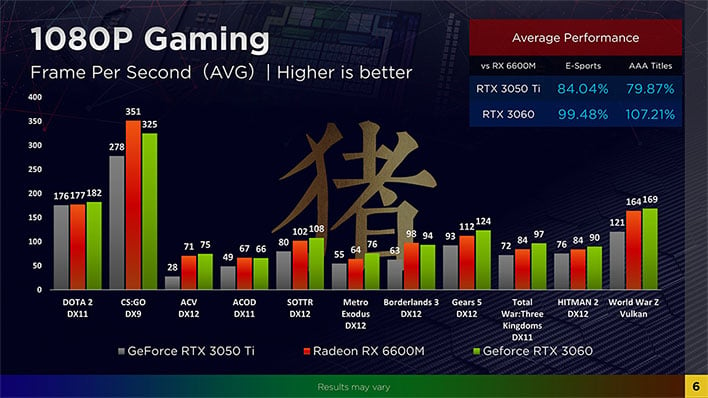 The site ran the same three mobile GPUs through a gamut of games, including DirectX 9 (Counter Strike: Global Offensive), DirectX11 (Dota 2 and others), DirectX 12 (Metro Exodus and others), and Vulkan (World War Z) API titles.
According to the benchmarks, performance across the board is very close between the Radeon RX 6600M and GeForce RTX 3060. AMD's graphics chip notches victories in Counter Strike: Global Offensive and Assassin's Creed Odyssey, and comes out just slightly behind in the other nine games.
In general, the benchmarks indicate the Radeon RX 6600M only gives up 0.5 percent in esports games, and 7 percent in triple-A games, when playing at 1080p.
The gap is a little wider at 1440p at almost 13 percent, though the Radeon RX 6600M still manages some respectable numbers. For example, both it and the GeForce RTX 3060 average 53 frames per second in Assassin's Creed Odyssey at 1440p, according to these benchmark runs. 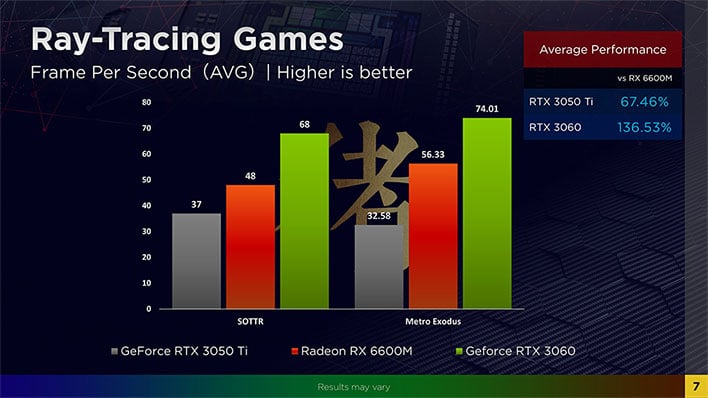 As we have seen on the desktop, these benchmarks suggest NVIDIA still has the edge in ray-traced gaming. There is a pretty big performance difference between the Radeon RX 6600M and GeForce RTX 3060 in ray-traced gaming, to the tune of 36.5 percent. That is not insignificant, and as represented here, it could be the difference between managing a consistent 60 frames per second or coming in below that mark.
On the bright side, the Radeon RX 6600M is faster than the GeForce RTX 3050 Ti in ray-traced gaming, and by quite a bit in games like Metro Exodus, if these numbers end up being accurate. We could also see ray-traced gaming performance improve as developers make use of AMD's FidelityFX Super Resolution (FSR) technology, which is AMD's open source answer to NVIDIA's proprietary Deep Learning Super Sampling (DLSS) technology.
There are quite a few additional leaked Radeon RX 6600M benchmarks covering the gamut from mining performance to content creation. The general takeaway is that if the results are truly indicative of what to expect from AMD's lowest end mobile RDNA 2 GPU, then laptop gamers are in good shape going forward.