Looking at overall GPU market share, Intel is still far and away the leader with 63 percent of the market, a decrease of 2 percent compared to Q3 2019. NVIDIA’s overall share decreased by 0.9 percent to 18 percent. AMD’s overall share, however increased from 16 percent to 19 percent. 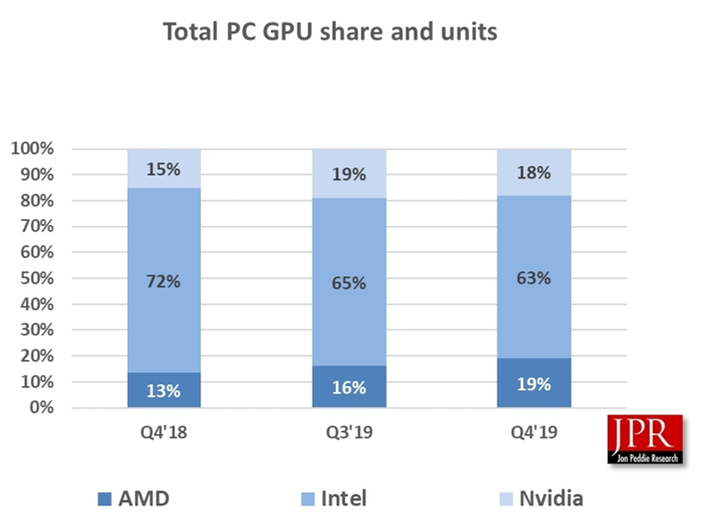 The report also gives us the rundown on these highlights for the quarter:

“This is the third consecutive quarter of increased GPU shipments,” said JPR President Jon Peddie. “However, Q1 which is seasonally flat to down may show an unusual dip because of supply chain interruptions from China due to the Coronavirus epidemic. 2020 is going to be a game changer with Intel’s entry into the discrete GPU market and a possible fourth entry by an IP company.”

Looking ahead, AMD, NVIDIA, and Intel are all on track to release next-generation discrete graphics cards for enthusiasts during 2020. AMD is readying “Big Navi”, which is reportedly built on RDNA 2 architecture and may feature up to 5120 cores. NVIDIA is following up Turing with its 7nm Ampere architecture and [up to] a rumored 3840 CUDA cores. Intel, on the other hand, has a new DG1 discrete graphics cards that is based on Gen12 Xe architecture.