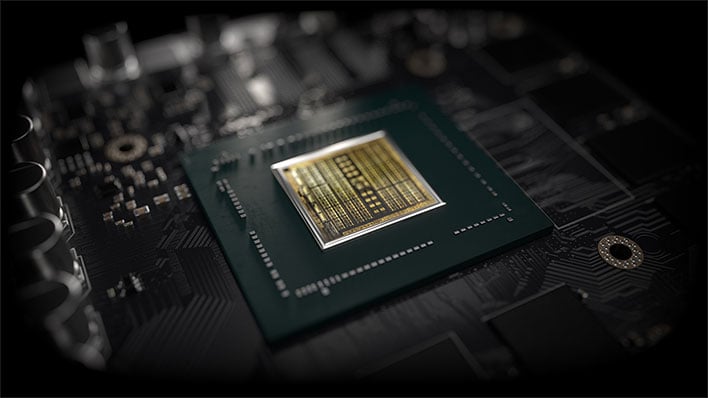 Strap in and secure any loose items, folks, because 2020 is shaping up to one heck of a ride. We are only a few days into the new year, and already there is a rumor floating around that NVIDIA's next-generation Ampere GPU will offer a 50 percent performance uplift over Turing, while consuming half the power.
That is a bold prediction for sure, given that Turing is pretty fast in its own right (though perhaps not quite as fast as some gamers hoped it would be, in comparison to Pascal outside of ray-traced workloads). And if the rumor proves true, it means NVIDIA would be in great shape to compete against AMD's eventual Navi 20 GPU, which will even the playing field with the addition of hardware-level support for real-time ray tracing.
The performance and power claims were included in a note to clients by Yuanta Securities Investment Consulting Co., as reported by the Taipei Times. The investment firm told clients to expect NVIDIA to launch its Ampere GPU in the second half of 2020, with the next-generation architecture benefiting from a shift to a 7-nanometer manufacturing process.
Generally speaking, going to a smaller, denser node typically yields performance improvements due to a variety of factors, and better power efficiency to boot. We saw this in the CPU sector with AMD's latest generation Ryzen processors based on Zen 2 making the shift to 7nm, versus Zen+ and Zen parts utilizing 12nm and 14nm nodes, respectively.

What To Expect From NVIDIA's 7nm Ampere GPU

Whether a 50 percent bump in performance at half the power is a realistic expectation, however, is up for debate. I'm skeptical, in part because NVIDIA has been content to stay just a bit ahead of AMD in GPU performance, which is where it sits now with its GeForce RTX 2080 Ti. Even with Navi 20 likely coming out this year, I'm not sure such a big jump in performance is needed by NVIDIA to stay in the lead.
That's to say, even if NVIDIA achieves a 50 percent bump while cutting power usage in half, it may not manifest in a shipping product, at least not right away. That might even be true of Turing, if NVIDIA sees fit to release a GeForce RTX 2080 Ti Super at some point.
The wild card in all this is ray tracing performance. We have heard rumors of NVIDIA's next-generation GPUs bringing beefed up ray tracing capabilities to the table, and that could factor into the overall performance prediction. Modern GPUs are no longer measured and weighted strictly by rasterized rendering benchmarks—dedicated hardware for ray-traced workloads (RT cores) and artificial intelligence chores (Tensor cores) factor into the equation as well.
Whatever the case might be, NVIDIA's move to 7nm will definitely translate to tangible gains, in both power and efficiency (to some extent). And lest anyone has forgotten, Intel will throw its hat into the discrete GPU ring this year as well, albeit probably at the lower end initially. So again, buckle up folks!