There is little doubt that Qualcomm will launch an updated version of its Snapdragon 8cx system-on-chip (SoC) for laptops, and when it arrives, the spunky piece of hardware figures to deliver a big leap in performance over the current version. That's what a leaked benchmark run over at Geekbench seemingly indicates.
The listing shows a benchmark run obtained from a Qualcomm Reference Design (QRD) chip, identified as a Snapdragon 8cx Gen 3 part. Assuming the listing is accurate, what we are looking at is basically an engineering sample for Qualcomm's next-gen Snapdragon 8cx. As currently configured, it is an 8-core/16-thread processor with a 2.7GHz clock speed.
Here's the benchmark listing... 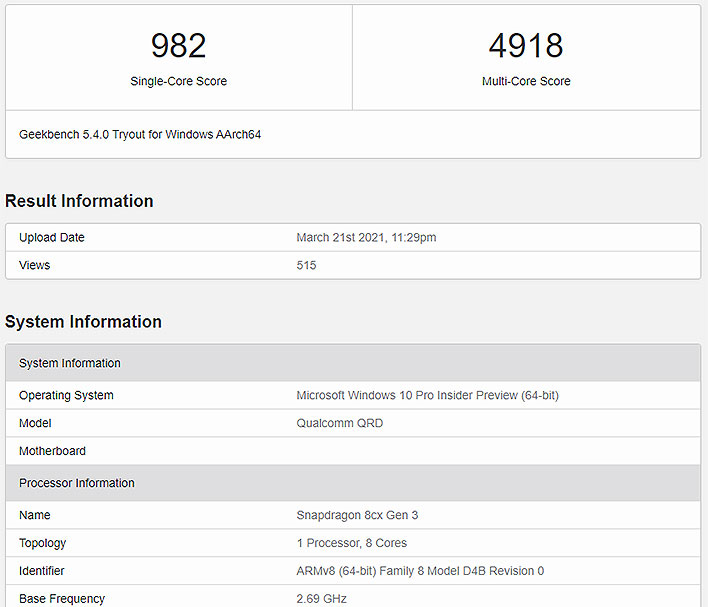 Other hardware details are non-existent, though the leak is consistent with a previous rumor, which suggested the Snapdragon 8cx would feature four Gold+ cores clocked at 2.7GHz and four Gold cores clocked at 2.43GHz. In essence, Qualcomm is said to be deviating from its typical pairing of high performance cores with power efficient cores, and instead opting for eight performance cores, with different clocks.
In theory, this could give the Snapdragon 8cx Gen 3 a big boost in performance over the Gen 2 part, and in practice, that appears to be the case. It scored 982 in Geebench's single-core test and 4,918 in the multi-core test. How does that compare? Very favorably, based on our performance metrics, which you can view in our Lenovo Flex 5G review.