One thing that the company didn't announce, however, was a new laptop-class successor to its potent Snapdragon 8cx platform that is most notably employed in the Microsoft Surface Pro X and Samsung Galaxy Book S. Regardless, Qualcomm's Snapdragon 8cx and Windows 10 on Arm has already shown promise with excellent battery life and relatively strong performance for the needs of most mainstream PC users.

You don't have to look very far to find out why all eyes are on Qualcomm for a follow-up to the Snapdragon 8cx. Apple announced its new M1 processor last month, which is its own custom design based on licensed Arm core technology. Early reviews for the Apple M1 have shown impressive performance in a number of single- and multi-threaded applications, while delivering double the battery life of previous-gen Intel-based Mac systems.

However, Qualcomm was the first to pioneer a consumer laptop product with a custom-tuned Arm architecture and a full-blown desktop operating system, so the comparisons were bound to crop up. At this week's Snapdragon Summit, Qualcomm President Cristiano Amon fielded questions from reporters (including HotHardware) about the Snapdragon 888 and Qualcomm's product roadmap. And as you might expect, executives were asked about the Apple M1. In a diplomatic but confident way, Amon explained that his company has long since blazed the trail for transitioning away from the x86 architecture for PCs.

"We invested early in Windows on Snapdragon, and we've been on a journey to build this ecosystem together with Microsoft," Amon said. "What we have seen in the past month is a broader validation that was the right bet."

Without even naming Apple, Amon directly addressed the elephant in the room. Touché.

Qualcomm SVP And GM Mobile, Compute And Infrastructure, Alex Katouzian, expressed a similar sentiment, adding that "It's a great validation of what we've been doing for the past few years."

That said, Snapdragon 8cx was announced back in 2018 and is more closely aligned with the Snapdragon 855 SoC of the same vintage. The first shipping products didn't arrive on the market until 2019 (most notably with the Surface Pro X via Microsoft's SQ1 SoC, a modified and optimized version Snapdragon 8cx). From a performance perspective, while running Windows 10 on Arm, these chips may currently be at a disadvantage to the Apple M1, but some day in the not so distant future that might not be the case.

Qualcomm's solution does have an advantage over the Apple M1 at the moment, however. The Snapdragon 8cx already includes an integrated Snapdragon X24 LTE modem, which affords devices using the SoC native cellular connectivity that has never been offered in Apple's MacBook family. Further, Qualcomm's follow-on Snapdragon 8cx Gen 2 5G solution couples the existing 8cx platform with the company's Snapdragon X55 5G modem. We believe that a true Snapdragon 8cx successor would go one step further with 5G connectivity, courtesy of an integrated Snapdragon X60 modem (just as we see in the Snapdragon 888). That is something that Apple likely won't be able to offer in its MacBook lineup until it integrates cellular connectivity into its future M(x) processors, (likely enabled in-part by its acquisition of Intel's modem division). 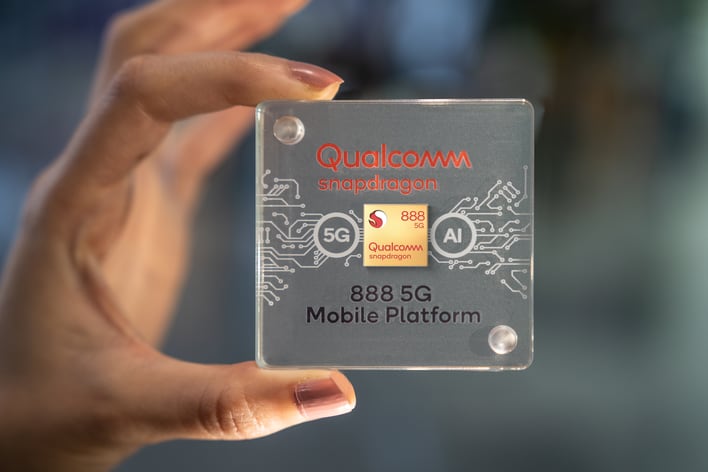 However, whereas Apple controls the entire stack with regard to software and hardware with its products -- and hence was able to make a relatively easy transition from Intel to the Arm-based M1 -- Qualcomm is beholden to Microsoft for app compatibility in Windows 10. Windows 10 on Arm machines with Snapdragon 8cx SoCs are able to run native Arm apps, and they can emulate x86 apps without issue (albeit with a performance hit). At this time, Microsoft has not publicly rolled out support for x64 emulation for Windows 10 on Arm (currently x64 apps won't even install or run on Snapdragon 8cx hardware). However, that's changing soon.

Microsoft announced back in October that this will change in future updates to Windows 10:

"We are excited about the momentum we are seeing from app partners embracing Windows 10 on ARM, taking advantage of the power and performance benefits of Qualcomm Snapdragon processors. We heard your feedback and are making Microsoft Edge faster while using less battery, and announced that we will soon release a native Microsoft Teams client optimized for Windows 10 on ARM. We will also expand support for running x64 apps, with x64 emulation starting to roll out to the Windows Insider Program in November."

So, not only will x64 emulation be enabled to open up a broader range of apps to Windows 10 on Arm, but the availability of native Arm64 apps will also grow. Microsoft is also doing its part with its own first-party Arm64 apps, and even Adobe is finally jumping on the bandwagon with a beta version of its Photoshop Arm64 app.

With the arrival of x64 emulation and a growing library of native Arm64 apps, Windows 10 on Arm is going to be an even more powerful platform. This is especially true for laptop users that want to have superior battery life while maintaining compatibility with all of their legacy apps. Qualcomm has laid the groundwork with the hardware for a couple of generations of its silicon now, and Microsoft is building out support in Windows 10. Now it's up to developers to get cracking on native Arm64 apps.

But don't be lulled into thinking that Qualcomm isn't keenly focused on developing more powerful PC silicon solutions for a future generation of 5G-connected Windows devices. In fact, they've been working hard on it for years and have finally started to move the needle.