As much as we are interested in flagship hardware, there is an enormous market for mid-range and entry-level hardware, where affordability and practicality converge. To ensure those markets are being served, Qualcomm today expanded its Snapdragon family with four new mobile platforms—Snapdragon 778G Plus 5G, 695, 480 Plus 5G, and 680 4G—to deliver more performance and capabilities across its entire family of Snapdragon SoCs.
None of these are intended to challenge the Snapdragon 888 Plus, Qualcomm's top mobile chip with copious AI processing muscle (as demonstrated in the latest round of MLPerf testing). But they each play an important role in Qualcomm's Snapdragon hierarchy, in part by helping to drive 5G adoption by making the hardware more accessible.
"Mid-range smartphones are expected to be the main driver for accelerating 5G device adoption—especially in emerging regions," said Deepu John, senior director, product management, Qualcomm Technologies, Inc. "These four new additions to our roadmap create significant opportunity for our OEM customers and provides additional options to continue to meet the growing demand for our 5G and 4G mobile platforms."

Just as we've seen at the top-end with the Snapdragon 888 Plus, Qualcomm's new Snapdragon 778G Plus is a bolstered version of its predecessor, with boosted CPU and GPU clocks. The 64-bit Kryo 670 CPU now goes up to 2.5GHz, which is a 100MHz bump over the non-Plus variant.
Qualcomm didn't talk specific GPU clocks, but the Adreno 642L engine presumably revs higher as well. Other bits remain the same, such as the inclusion of a Hexagon 770 processor to drive AI acceleration, and a fused Snapdragon X53 5G modem-RF system with 5G mmWave and sub-6GHz support.
The other Plus mode is the Snapdragon 480 Plus 5G. Aimed at the budget mainstream market, it features the same octa-core Kryo 460 CPU as its predecessor, but it has been goosed by 200MHz to 2.2GHz. According to Qualcomm, there have been more than 85 devices announced or currently in development that are based on the Snapdragon 480, and the Plus model will enable OEMs to cram more performance into cost-friendly handsets. 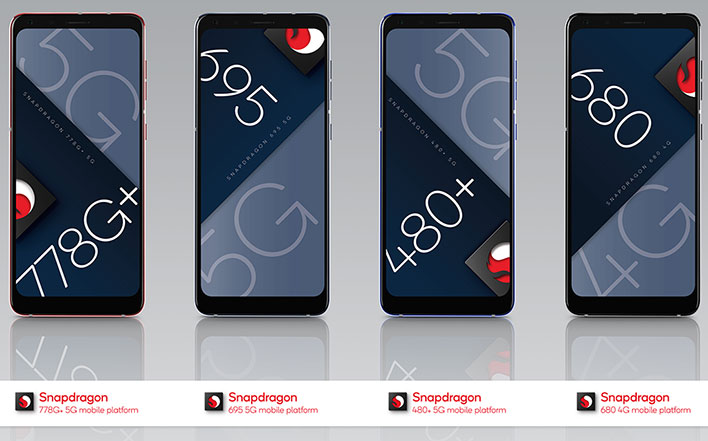 Meanwhile, the Snapdragon 695 5G sits a tier above the Snapdragon 690. It wields an upgraded Kryo 660 CPU clocked at 2.2GHz, an Adreno 619 GPU, and a Snapdragon X51 5G modem with both mmWave and sub-6GHz support. Compared to the Snapdragon 690, Qualcomm says the 695 delivers up to 30 percent faster graphics rendering, and offers 15 percent more CPU performance. Not too shabby.
Finally, the Snapdragon 680 4G is the lone 4G-only chip of the bunch. This is a sort of stopgap solution aimed at addressing "the continued demand for incredible LTE experiences," as the market moves towards a 5G future. It's built on a 6nm process with a Kryo 265 CPU and Adreno 610 GPU, and is "designed to deliver compelling all-day experiences, including optimized gaming and triple ISP featuring AI-enhanced low light capture technology."
Even so, 5G is where Qualcomm is hyper-focused these days. Qualcomm says consumers are poised to spend $80 more on their next smartphone. The company also claims 5G is now accessible to over 3.5 billion people around the globe, highlighting the need for more hardware options, which most of these new chips are intended to address.
"OEMs are now delivering attractive, lower-cost 5G smartphone options to consumers everywhere, all contributing to the rapid scaling of 5G around the world," Qualcomm says.
Look for these new Snapdragon parts to find their way to consumer devices in the coming months.