When the 5G revolution hit smartphones, MediaTek was quick to embrace the emerging wireless standard with integrated 5G SoCs for smartphones. However, the company's 5G modems up until this point have only supported sub-6GHz 5G networks, and not the faster (but admittedly less prevalent) mmWave bands.

That all changes with the announcement of MediaTek's new M80 5G modem which supports both sub-6GHz and mmWave 5G into a single-chip design. This puts MediaTek on more even footing with its rivals Samsung and Qualcomm, which have both field sub-6GHz/mmWave solutions in a single chip.

The M80 is the successor to the Helio M70, which is currently embedded in MediaTek's Dimensity 5G SoCs. MediaTek says that the M80 can be used with non-standalone and standalone 5G networks, while the company pegs maximum downlink and uplink speeds at 7.67Gbps and 3.67Gbps respectively. For those keeping score, the Qualcomm's Snapdragon X60 tops out at 7.5Gbps and 3Gbps respectively. However, we must remember that these are theoretical speeds, and we probably won't be seeing anything approaching that top-end anytime soon with today's smartphones and networks (although Verizon's mmWave network can deliver peak downlink speeds slight over 2Gbps). 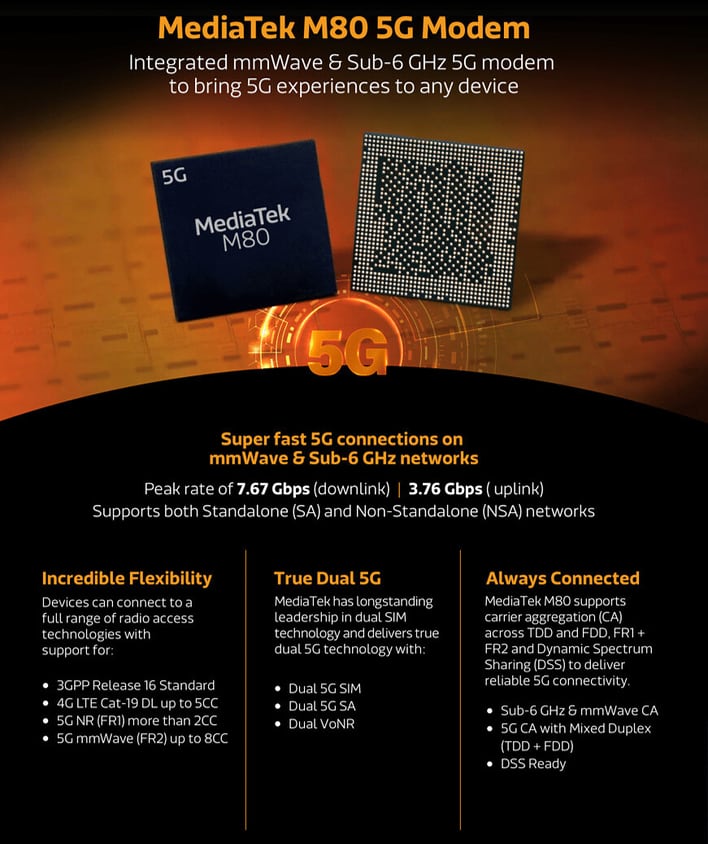 The M80 supports carrier aggregation with both sub-6GHz and mmWave bands, and supports Dynamic Spectrum Sharing (DSS). DSS is used -- quite controversially we might add -- by Verizon to deliver nationwide 5G (sub-6GHz) coverage. However, since 4G LTE and 5G are signals are being sent out using the same network band, Verizon's sub-6GHz 5GHz performance is often slower than 4G LTE.

According to MediaTek, it will begin shipping samples of the M80 to its customers in the latter half of 2021.