Fancy new features could be headed to next-generation game controllers. As it pertains to the DualShock 5 for the Sony's upcoming PlayStation 5 console, biofeedback could be part of the package, allowing the controller to detect the player's heartbeat and even if their level of sweat. For what purpose? Increased immersion, of course.
A supposed patent viewed by Respawn First outlines the biofeedback mechanisms. Assuming it's real, Sony describes having sensors on one or both grips of a controller (potentially the DualShock 5) to track electrodermal activity, or sweat secretion, and a user's heart rate. That information could then be relayed to the PS5 so that changes in gameplay could be made accordingly.
How exactly this might work is not known, though it has our minds racing at the possibilities. Perhaps the most logical implementation would be a dynamic difficulty level in a particular game. If a player is having a hard time beating a level or conquering a boss and is getting frustrated, the game could adjust the difficulty, depending on the player's perceived stress level.
Hopefully this would be something the user could choose to turn on or off, rather than having dynamic difficulty settings force upon them. Of course, there could be other ways to leverage biofeedback as well, depending on how creative developers get. 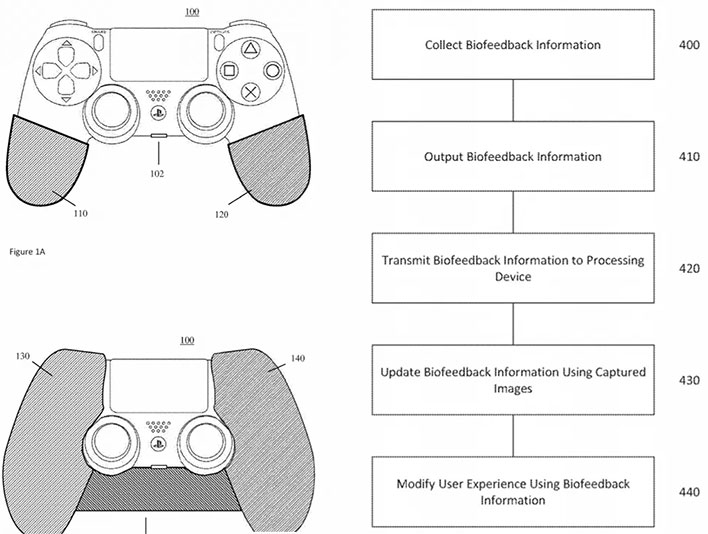 "There is a desire in computer gaming to provide an immersive and highly interactive experience for players, so as to enhance the enjoyment of the player. This has become of particular interest with the increasing availability of head-mounted displays," the patent states.
The patent also discusses using images of the user captured with with the PlayStation Camera. It's not clear how it would work in conjunction with the biofeedback sensors on the controller, though.

It will be interesting to see how the DualShock 5 comes together. Previous patent leaks have pointed to it potentially having adaptive triggers and other features. It's also worth nothing that PlayStation CEO Jim Ryan previously indicated there are "bigger differences" coming to the PS5 that have not yet been announced.
Barring any hiccups between now and then, the PS5 is scheduled to launch at the end of the year.