Gamers are expecting a significant upgrade in many aspects when Microsoft's Xbox Series X console launches later this year. One of the updates will be a brand-new Xbox store that is code-named "Mercury." A look at that future Mercury update for the Xbox Store app on PC has leaked, showing a beautiful storefront with a design loosely based on Microsoft's fluent language. Mercury also has refreshed icons that are similar to those found on Microsoft's PC Store app.

Anyone who has seen the beta Xbox app or the new Xbox Game Bar for PC users will recognize the Mercury look and feel. The interface has the acrylic blur effects Microsoft currently favors and certainly looks very nice. We particularly like the rounded corners and opaque backgrounds. The new version of the Xbox Store has all the features that are present in the current version, including trailers, screenshots, game information, reviews, filters, and more. 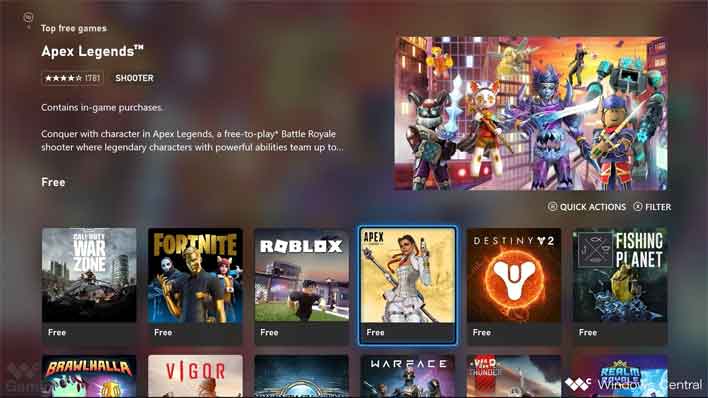 The changes extend to the Movies & TV store along with the app that is specifically for Xbox. Mercury won't be targeted for the next-gen Xbox console alone, however. The same experience is anticipated across all Xbox consoles, including the Series X that is expected to launch this holiday season, despite the pandemic that slowed everything down. The leaked video allegedly came from the Xbox Alpha Ring test program, and it looks complete.

The fit and finish suggest the new Mercury store is close to landing in the Xbox Insider Program for further testing. The video of the new store in action, which can be seen above, is running on a PC. It's unclear if the same sort of performance and fluidity will be possible on the Xbox console but it's probably that it will offer the same level of performance. A new store experience isn't likely to be a key feature gamers are looking forward to for the Xbox Series X. Another key feature of the next-gen console will be backwards compatibility, with which Microsoft recently said would also add HDR and 120 fps support to legacy games.