One of AMD's hardware partners appears to have tipped the company's hand with regards to the upcoming Radeon RX 6700. While nothing has been announced yet, leaks and rumors surrounding the non-XT variant have been swirling for several months, some of which suggested the card will debut with 12GB of GDDR6 memory. An apparent 'oopsie' by PowerColor, however, seemingly confirms it will arrive with half that amount.
If we can back up a moment, a prominent leaker suggested last November that a Radeon RX 6700 SKU could possibly feature a Navi 22 XTL GPU paired with 12GB of GDDR6 memory, along with a 156W total graphics power (TGP) rating. This was even before the Radeon RX 6700 XT made its official debut (check out our Radeon RX 6700 XT review to see how it fares).
Then earlier this month, it came to light that ASUS had registered a pair of Radeon RX 6700 graphics cards with the Economic Eurasian Commission (EEC), including a stock-clocked model and a factory overclocked SKU. Both model numbers indicated they would ship with 12GB of memory. But will they really, or will the Radeon RX 6700 land with 6GB of GDDR6 memory?
This is where things get interesting. The folks at TechPowerUp say "PowerColor inadvertently put out press shots" of the not-yet-released addition to the Radeon RX 6000 series, and the render of the retail packaging clearly shows it as having 6GB of GDDR6 memory, not 12GB. It also indicates AMD will be taking aim at 1440p gaming with the upcoming part like it did with the XT model.

So what gives? It's hard to know for sure, but it is entirely possible that there will be both 12GB and 6GB variants of the Radeon RX 6700. The leaked press render points to PowerColor's 'Fighter' model, which could be an entry-level SKU with the lower amount. 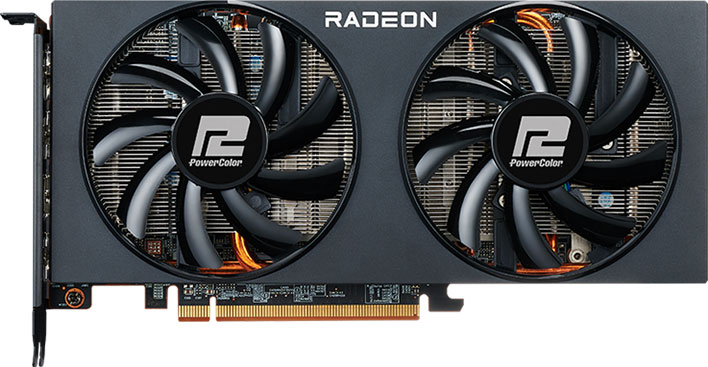 As for the card itself, it looks identical to PowerColor's Radeon RX 6700 XT. It sports a custom dual-fan cooling solution and a few copper heatpipes. Whatever the official specifications end up being for AMD's upcoming addition to the RX 6000 family, PowerColor's Fighter model will likely adhere to them, rather than sport a factory overclock.
All that said, it is also possible that the supposedly leaked render is a fake. It's not clear exactly where it showed up, only that it purportedly came from PowerColor. It would be easy enough to Photoshop the "XT" off the similar render for that model, if PowerColor is not actually the true source.
In any event, we should find out soon, as it seems likely the Radeon RX 6700 is not too far off in the distance.